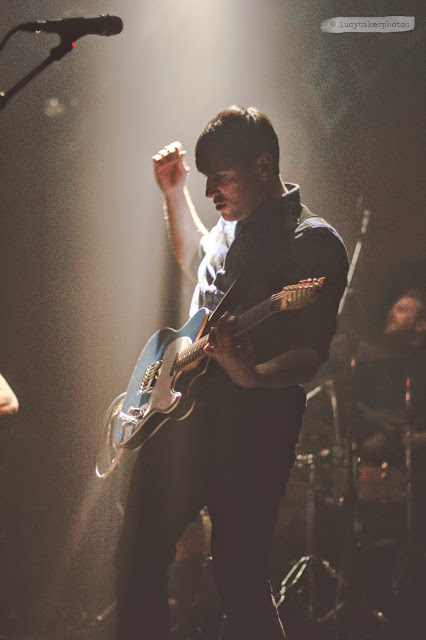 Delorentos made a triumphant return to Vicar Street to close their nationwide “Night Becomes Light” tour. Playing to a packed house, it was clear that Delorentos are back with a bang with their 2014 release.


Support act, Mullingar youngsters The Academic, played a rousing set to get the growing crowd in the mood. Signed earlier this year to Global Publishing, this quartet have an impressive list of support slots under their belt, having already supported the likes of The Pixies, The Riptide Movement and Little Green Cars. With solid tracks like “Bear Claws”, “Why Can’t We Be Friends” and “Girlfriends”in their repertoire, these are an act to keep an eye out for in 2015.

Delorentos wandered onstage to little fanfare, but the understated entrance was the only sedate thing about the entire show. Opening with “Forget The Numbers” (the track from the new album that I was most excited about seeing live), the night just seemed to build and build, with a brilliant mix of new and old songs. With the exuberant crowd singing and clapping along from the outset, it was clear that the lads were enjoying themselves immensely.

Stand out tracks on the night from the new album for me were “Everybody Else Gets Wet” (if only for its immense audience participation) and “Valley Where the Rivers Run”, with old favourites “Petardu”, “Stop”, “Little Sparks” and “Secret” almost lifting the roof off Vicar Street.


Closing with a Bruce Springsteen cover played with The Academic (AcaRentos? Delodemic? I see a super group opening right there), and just enough chaos on stage to get the crowd whipped into a frenzy, this show was the perfect festive night out.