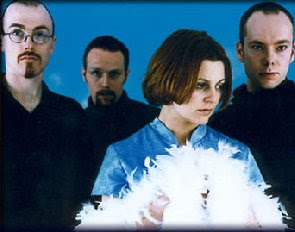 The Plague Monkeys were a four piece band from Dublin, Ireland. They were Carol Keogh (vocals), Donal O’ Mahony (guitars, keyboards and mandolin), Barry Roden (bass) and Thomas Haugh (drums, percussion and keyboard). The band formed in December 1995 until circa 2000 and made some of the most beautiful music imaginable. Think along the lines of a cooler Cranberries or an upbeat Cocteau Twins!

1996
The band make a video of 'The Plague Monkeys'


Legacy: Singer Carol Keogh is currently reviving her solo career after spells performing in Automata and with Roesy and Jerry Fish. The album 'Surface Tension' is one of my favourite Irish Albums ever and it's still an album I return to again and again.

Anonymous said…
Not sure you now this - Carol and Donal went on to form The Tycho Brahe / Tychonaut:

Daveboy said…
I've been trying for ages to get my hands on "The Sunburn Index" but can't get it anywhere. I know it had a limited release but it seems to have disappeared of the planet.
Any hints where to find it?
22 September 2009 at 21:32

Loveless said…
The Plague Monkeys are a band I return to again and again myself. Vastly under-rated! I can sort you both out with 'The Sunburn Index' on CD if you're still looking for it..

Unknown said…
Well my email is at the top of the blog page. Any help there would be great Brendan thanks.
27 September 2009 at 19:13

daveboy said…
Brendan, I've been trying yo get in touch with you on irishmusiccentral and myspace about the sunburn index.
Hopefully I'll catch you at some stage. Dave
25 November 2009 at 16:41

Daveboy said…
Brendan(loveless),
I've been trying to get in contact with you about The Sunburn Index on irishmusiccentral and your myspace page. If you see this can you give me a shout! Thanks, Dave
25 November 2009 at 16:46

Loveless said…
Did you find the album Dave.. ?

Daveboy said…
Brendan - thanks for getting back to me about that. No, I've had no luck finding it but have been distracted by flooded house for the last few months. Any help would be appreciated.