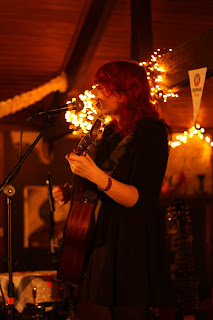 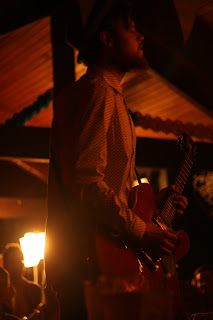 Review by Peter NagleThe Attic Bar upstairs in The Pound pub next to the historic Swords Castle is the perfect room for live music and the scene of local Swords musician Alex Smyth's fundraiser to record his debut EP. First up was 'Shay Cunningham' with a short set of self penned songs that showcased his fine songwriting. Shay's vocals were delicate at times and had the ability to emphasis the emotions within tose songs. Quietdust is another young singer-songwriter with plenty of talent. She plays acoustic guitar predominantly like a lap guitar which is fairly unique and different. It was an unusual quirky set which was charming and entertaining. https://www.facebook.com/QuietDustMusicDonegal's Chanele McGuinness is well liked in Swords and it's very obvious why. Chanele's vocals are stunning and her songs are well crafted emotional songs which demand your attention. Chanele's time is now with recent appearances on The John Murray radio show and high profile support slots such as opening for Orla Gartland in The Sugar Club https://www.facebook.com/chanelemcguinnessmusicInstrumentalist Alex Smyth begins with electric guitar rifts using loop pedals to build the intensity and to fill the packed room with industrial sounds before turning the notch up further by adding drums to the track. It was the beginning of a great performance that looked and sounded amazing on stage. Alex varied the set by alternating from electric to acoustic guitars, using drums on a few songs and staggering the amount of loops throughout the set. On the intense songs the crowd's response was infectious which spurred on Alex even further and became the perfect ending to a really good night's entertainment and music. Check out Alex's facebook here and watch out for his EP during the Summer:  https://www.facebook.com/alexsmythmusic
Alex Smyth Chanele McGuinness Gigs The Attic Bar