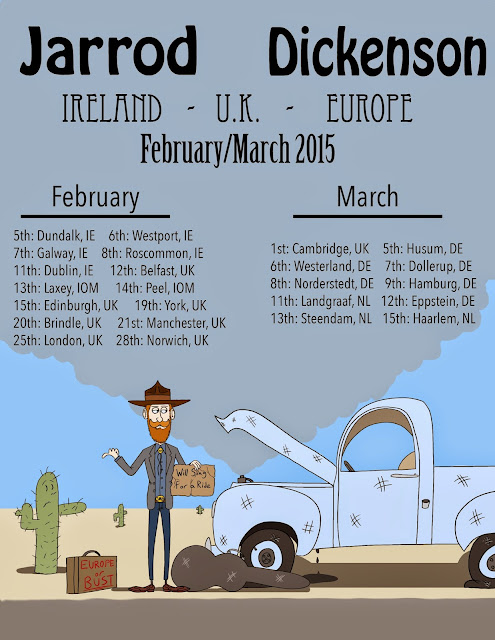 
1. Who are you?
I am Jarrod Dickenson. I'm a relatively tall, ginger-bearded Texan who wears big hats, writes songs and sings them to anyone who is brave enough to listen.

2. Where are you based?
I am based in Brooklyn, NY.

3. What achievements do you want me to know about?
I won my high school district golf tournament when I was 17 years old...does that count?

4. What are you up to now?
I am about to embark upon a 24 date tour of Ireland, UK, Isle of Man, Germany and Netherlands, and I am frantically trying to kick a cold before doing so.

5. Name something unique about you or/and your product?
I didn't start playing guitar until I was 18 years old.

6. What is the best song ever written?
That's a tough one. "American Tune" by Paul Simon is pretty brilliant...


7. What's the best album ever made?
Another tough one. Abbey Road? In The Wee Small Hours?

8. What are your future plans?
My immediate future plans are to drink some more water, eat some fruit and take another swig of "Sanderson's Throat Specific Mixture" in an attempt to kick this cold before the tour starts tomorrow.

9. Where can I spend money on you or your product?
You can spend money on me or my product by purchasing a ticket to see me live, or by going to www.jarroddickenson.com (or iTunes). For the love of God, please don't go to Spotify!

10. Last question, ...... Make Us Laugh [Share a joke, a link to youtube clip anything at all]
To make you laugh I'll quote the late, great George Carlin: "In other news, a man attempting to walk around the world drowned today."

with special guests
The Young Folk
and
Michael MacLennan