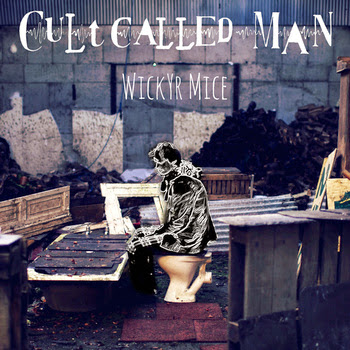 Cult Called Man HQ is Camelot Studios, Dublin. We've become part of the furniture at this stage spending on average 40 hours a week up there working closely with the owner and our producer, Lancelot Smith. We've got a good thing going.

3.  What achievements do you want me to know about?

Played two shows at Electric Picnic last year, one on Salty Dog - We were in Hot Press' Final Five for the Big Break competition - Guinness Amplify seem to like us. They gave us three free days recording in any studio we want. Then they have us playing up in Belfast as one of the final 20 'graduates of the first Guinness Amplify' (their words, not ours). They're just some obvious ones. But there's also ones like independently releasing two EPs, currently recording our next EP/Album, building a name for ourselves and doing this whole band thing full time without losing too many friends or selling our bodies.

Right now - we just released a new single (Fri Jan 16)  from our second EP. The single is called 'Wickyr Mice' - the EP is called 'The Mr. Wednesdae EP' . Our video for that is online and we've just been promoting that a lot - We'll be heading up to Belfast to do a few gigs around there including the Guinness Amplify gig at Aether & Echo.


5.    Name something unique about you or/and your product?

Our sound is unique. Although I think it'll attract a lot of different tastes, there's a lot to it.  Our look is unique and our attitude towards this whole process of career-path-paving is quite unique, so we believe. We're not a 'cool' band. We're not an angry bunch of sexy hairy boys who do this for the free cheap bottles of beer and a pat on the back after busting your balls all week to make an event a success. We're just 6 musicians who are serious and professional. We know what we can bring to this industry - whether it's welcome or not and so far it has been welcomed and we've had nothing but positive feedback to what we're doing, which can only mean what we're doing is right.

THE best song ever written? As there's only one of me here out of the rest of the men I can only speak for myself. I'm going to say 'Sara' by Fleetwood Mac. If I gave this question anymore time I'd probably have a different answer but this song is just a perfect song, in my opinion.

Ha.. RUMOURS. Although, again, I can only speak for myself. I'm sure the other lads would have a lot more to add. There's a good mix of taste.. Razmo is a huge Talking Heads fan which you can clearly see when he's on stage. Aaron, our drummer, would probably change his name to John Bonham if given the chance.

We spent most of last year getting to know people and I guess, 'testing the waters'. 2015 will be a busy one - we've started a new record, we've a good few gigs booked and more in talk and since we had a lot of awesome experiences in 2014, we're heading into this year with a pretty good attitude.

9.   Where can I spend money on you or your product?

Simples. We're on Bandcamp ( cultcalledman.bandcamp.com ) and iTunes and Spotify and you can always come to our shows and buy our CDs there.