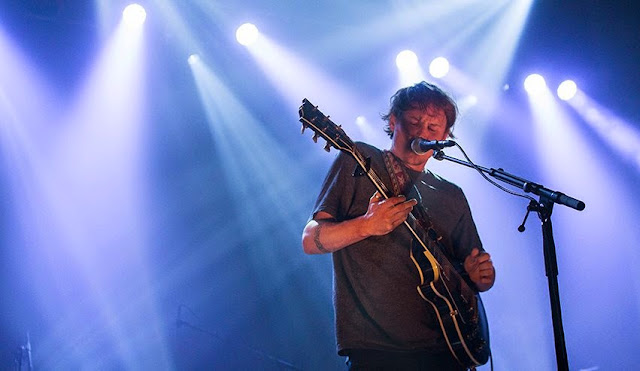 Following on from Lucy Warren's review of Sunday's gig I got the opportunity to see Ben Howard live in The Olympia on Monday night. Ben Howard and his awesome band put on one hell of a live music experience with musicianship to literally take your breadth away and a light show to dazzle.

However, when you peal back the initial gloss I very quickly asked if this is the best that Ben Howard could do. Did the band play their best songs from the two albums released or was this about performing the new album in it's entirety and therefore boosting sales?

Sadly because he performed the new excellent album in full with a sprinkling of older tracks this was a case of the former. It annoyed me but fans all over twitter loved it and the crowd were enthusiastic for a man with little persona on stage. I'd say the 3Arena gig in the new year will have a more balanced set-list. For this tour, Ben Howard and band are happy to perform a bunch of dull atmospheric inferior songs rather than fully engage the crowd with those gorgeous songs from 'Every Kingdom'. To not play the 'hits' is unforgivable.

Overall, Ben Howard and the band were hugely impressive but the choice of songs left me deflated.

Anonymous said…
This was the 'I Forget Where We Were' tour. Why did you expect so many songs from EK? All of the concerts he has done on this tour have pretty much done the new album in entirety.
10 December 2014 at 11:59

Unknown said…
Yeah and do you think that's ok to do? Not in my book nor should anyone else think it's ok for an artist to disregard their better well know tracks.
10 December 2014 at 19:14