Crow Black Chicken are amongst the formost purveyors of blues rock in Ireland. Made up of Christy O'Hanlon (Vocals, Guitar), Stephen McGrath (Bass) and Gev Barrett (Drums, backing vocals), the trio deliver a blistering, powerful performance from show to show and this comes across in their latest offering Rumble Shake. 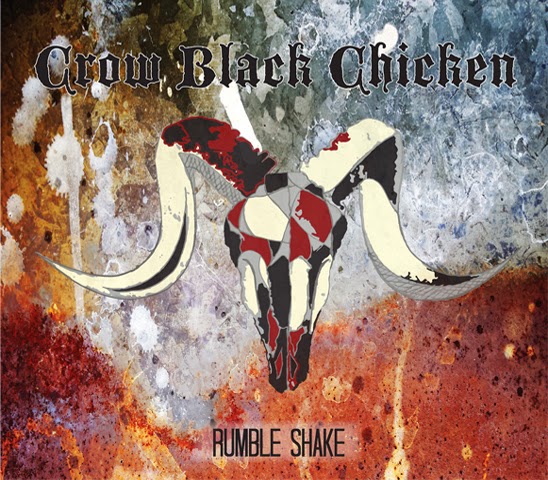 Rumble Shake is Crow Black Chicken's second album, following on from their 2012 debut Electric Soup. Their new album combines a mix of electric laden melodies, over powerful drums and bass. The gritty vocals lift the music, into something that feels inspired and brilliant in its rawness. There is no attempt here to disguse the deep and persistant earthiness, that comes through in each song. This is blues carried through on heavy amplification. The songs are fantastic and if there's a level of polish missing, it's because it's not needed. From the epic sounding Priest Hunter to the fan favourite Sit With Satan, this is an album that shows off the best, of one of Ireland's rising lights.  Recorded in Westland studios, the album also features a song written by and with an appearance from Texas blues legend Ray Wylie Hubbard.

This is a band that I found people either love or hate. They are simply brilliant at what they do, but what they do isn't to the taste of everyone. The focus on the deep, dirty, pounding blues-driven rock of the American Southern States, is a sound that you can either take or you can't. To wander into a Crow Black Chicken gig, to watch heads shaking and feet flying is a great experience. Make no mistake, you're not going to hear a deeply introspective, epiphany provoking collection of songs here. This is pure balls out electric blues, by one of the best Irlsh bands to have grabbed this genre by the throat. If this is your thing, then you can't do better than to give Rumble Shake a listen.


Crow Black Chicken are a band that never stops playing live. By their own account, they are always on tour. At the time of writing, the band are currently on a Europe wide tour to promote Rumble Shake. Based in Cork, Crow Black Chicken will be playing a series of dates across Ireland in August included a performance at Electric Picnic on August 29th.