Posted by Unknown on August 29, 2010
A hugely enjoyable debut album from Galwegian Seán Kangataran. It's a singer-songwriter album with global appeal. Easily one of the best albums of the year. 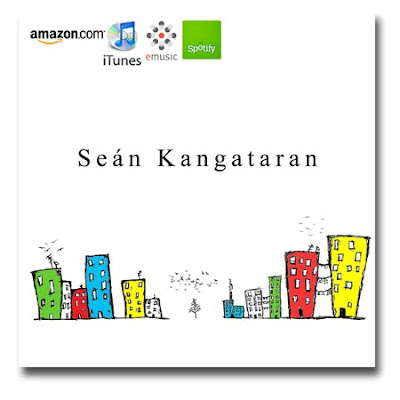 When I haven't written a review on the blog for a few days it's usually because I'm really enjoying the next album I'm about to write about. It's a nice perk to the blog when a talented songwriter approaches me to write a review. I get to be one of the first batch of people to have heard the album and I really hope many many people get a chance to hear Seán Kangataran's self titled debut.


The album reminds me of Sufjan Stevens's Illinois album. There's a definite hint of Americana is some of the tracks. Unfortunately the music media mafia in this country will probably write the album off as singer-songwriter fodder but Seán's album offers so much more.


The lyrics really stand-out on the album. There are tales of love and relationships, of beauty and self image, of loss and breakdowns and of prominent life journeys. These lyrics are well thought out and mean something to me. It's one of those albums which I'll hold important to me way off into the future. The best tracks for me on the album are the upbeat opener 'Burn it All', 'Hold Back' and the album sampler below 'Hairpins'.

Listen to the track Hairpins here:


"After spending the early part of 2009 working intimately with Glen Hansard on The Swell Season's acclaimed album; "Strict Joy" Seán set to work recording his own full length debut album.

It was a miserable affair and was rightly and thankfully scrapped (misery needs no company). In May of 2010 after spending the first half of the year away from music, in a swimming pool, he began again. The goal was simple. To take the same sad album and give it joy and give it life. He stumbled onto the finest streak of good fortune anyone could hope to have.

He found a drummer who had spent thirty years teaching drums but never played on an album, he found trumpets and trombones, he found a homeless violin player that had spent twenty-three of his twenty-eight years on the planet playing classical music. He convinced Karl Odlum (The Frames/Swell Season/Gemma Hayes/Fionn Regan) to mix the album and Fergal Davis (Muse/Josh Ritter) to master it. The entire album was tracked in thirty days and completed for the paltry sum of €2,700/$3,500."
Albums Fionn Regan Gemma Hayes Glen Hansard Sean Kangataran The Frames The Swell Season

Alan Doyle said…
Thanks for this review. The featured track has a nice sound, I'll definitely check out some more of this artist.
30 August 2010 at 09:35