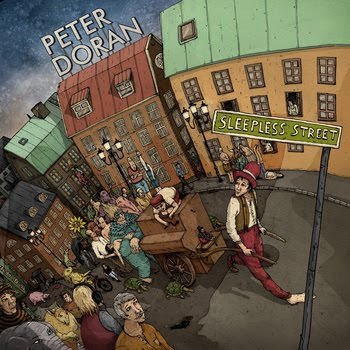 I seen Peter Doran support Nick Kelly in Whelans well over a year ago and discovered his debut album 'Wood' relatively recently. 'Wood' is a very ambitious debut full of big sounds. In contrast 'Sleepless Street' finds Peter Doran singing delicate beautifully arranged songs accompanied by strings. The mood created by the Cello in particular within the album reminds me a lot of Damien Rice's 'O'.


The album kicks off with the big sound of 'Hunter's Sketches' which doesn't do much for me to be honest. The next three songs however are wonderful. In particular 'Pathways' which would be on regular rotation if I were the controller of music for a radio station. It's a great song with a catchy guitar rift, background cello strings and the vocal melodies any songwriter would be proud of. 'Pathways' for me is the main track on the album and worth the price of the album alone!


The next song to grab my attention is the Mic Christopher sounding 'The Composer'. It has that swagger in the song which can automatically make the body move. It's a song about the challenge of being a composer of songs and letting them go into the world!


Even when the sound is stripped back to just Peter's vocals and guitars the results are gripping such as in the song 'Steeped in You'. I find it very easy to be transported through the stories in each of the songs on 'Sleepless Street' due to Peter's fine vocals. To make an ultimate comparison I think Peter's vocals are the close to David Gray's vocals from 'White Ladder' era.


'Sleepless Street' is a quality album of intelligent songs sung by a singer with a great voice. It has upbeat rock tracks, delicate ballads, piano based tracks, strings, gripping lyrics and even concludes with an epic seven minutes plus swooning ballad which gave the album it's title. If you're a fan of people like Make Geary, Tom Baxter, Mic Christopher etc. then this album is right up your street!