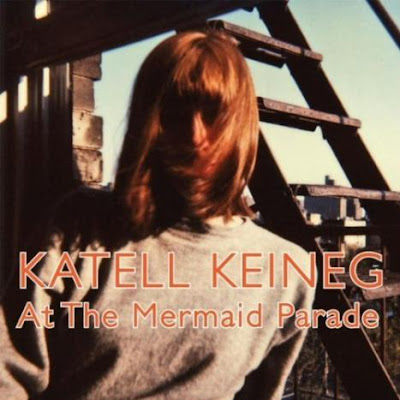 I've had Katell Keineg's 'At The Mermaid Parade' a number of weeks now and it's been played pretty much non stop. It's preventing me from getting other reviews done because I can't stop playing the album!


Katell was born in Brittany and raised in Cardiff and the only daughter of Breton poet and playwright Paol Keineg and his then wife, Judith, a Welsh political activist and schoolteacher. Katell qualifies for coverage on the blog because she lived in Dublin for well over a decade and because I've been a massive fan since her majestic debut 'O Seasons, O Castle' released by Electra in 1994.


It is important to know I've been a fan since then of Katell's beautiful voice and amazing songwriting. I'm already converted and to me 'At The Mermaid Parade' is a return to the quality of her debut. I love how this album marries all the wonderful attributes of Katell like her delicate voice with a biting attitude in her lyrics. Songs like 'The Arsehole Song' and 'World of Sex' brings an extra dimension to Katell's charm!


The album's best track is 'Summer Loving Song' which charts a road trip near her new home in America. 'Thirteen' is a lovely song about being thirteen and in love! 'Old Friend' is Katell's voice a few notes on piano about the loss of a friend:
"Out in the pasture, at dusk, old friend, I miss you, so much". The song 'Calenture' is such a great song to finish the album with beautiful refrains and again the lyrics paint wonderful mental pictures. The song 'Olden Days' is a good representation of the quality of this album:

'At The Mermaid Parade' is a great album. I'm not too sure if it's going to win Katell millions of new 'fans' but if you've been lucky enough to have a Katell Keineg cd in your possession then you won't go wrong here.


The album is out on Damon Albarn's label Honest Jons. You can listen to the whole album there and get the full album on download for just £5 or the cd for £10!

Here's Glen Hansard championing Katell Keineg for an Irish TV programme back in 2002! This song was covered by Natalie Merchant!