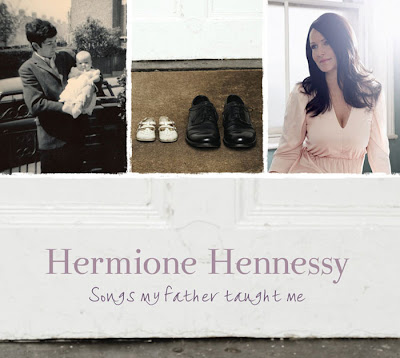 Christie Hennessy's daughter Hermione has released the album her father had encouraged her to make when he was alive. Hermione is keeping the spirit of her father's music alive with this collection of songs.


Included on the album are songs written by Iris DeMent, Carole King, Neil Finn as well as three Chrisrty Hennessy songs; Oh Jealous Heart, Late at Night and Soho Square which is also a duet with Chrisrty Hennessy.

I do admire the scope and ambition of the album and it has many good things going for it. The album really does bring attention to the greatness of Christy Hennessy's songwriting. The single best thing about the album is the opening track 'Wise Up' written by Aimee Mann as it made me delve back into Aimee Mann's back catalogue to remind myelf of her brilliance. The single 'Fall at your Feet' is also a really good version of the Crowded House hit. I have to admit that the album does lose my attention after track four hence:


Hermione Hennessy - Songs My Father Taught Me [9 out of 12]