Posted by Unknown on April 25, 2010
It's been just over a year since I discovered the musical oasis Boyles in historic Slane. If it was in walking distance of my house I'd be 'Norm' from Cheers! Here's a little mix of songs from some of the best acts to have played Boyles in the last twelve months. 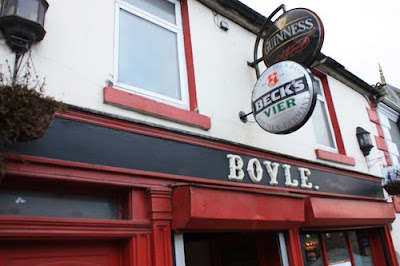 Wayne Brennan - In My Hands

Wayne was the first established artist I seen live in Boyles. He had just released his debut album 'In My Hands' and played a wonderful gig showcasing his great songwriting, amazing guitar skills and his interpretation of songs like 'Stairway to Heaven' and 'Spanish Caravan'.

The Long Knives played the most recent 'Live at Boyles' gig in March. Their performance rates as one of the best because they had great songs, fine vocals and a big rock sound. They are playing Boyles again on May 3rd!

Boyles has almost become the 'home ground' for Henrietta Game. Their performances have been outstanding in Boyles. Catch the band back in Boyles on June 17th where they suport 'Jukebox Gypsy'.

It was a real pleasure to catch Sean's set in Boyles last Summer but it was even better to get to know the guy. Like all Donegal folk Sean is such a genuine guy who's busy in Denmark gigging and promoting his wonderful second album 'Time is a Friend'.

Elder headlined the November sessions gig and was so good Andrew booked him there and then for the Mary Coughlan support in January.

The Whiskey Limbs - Dancing on the Fuse

The Whiskey Limbs played a great set in the sessions gig in January. Not only were their songs great, their sound perfect but also their stage pressence and between song charm. They are also playing Boyles on May 3rd.

Groom played the August sessions night and it was my favourite sets. I love their album released lasy year and the acoustic arrangement on the night gave a different dimension to their indie pop sound.

I seen The Whatmans play Boyles last Summer to a packed venue. I think every mate and family member arrived to Slane from Navan! While there was potential at that gig the recent performance in Boyles was outstanding. Definately a band to keep an eye out for.

Dayo is going to release a debut album which is going to be superb. Can't wait to hear it.

Junah played a lovely set at our Christmas gig in Boyles. I really love their sound and set-up and is another act whose debut album released this Summer is going to be a joy to hear.


My Favourite Performance in Boyles last year was for me Kiernan McMullen who played the very first '2UIBestow Sessions/Live at Boyles' gig and did this to a packed crowd of maybe close to 80 people: