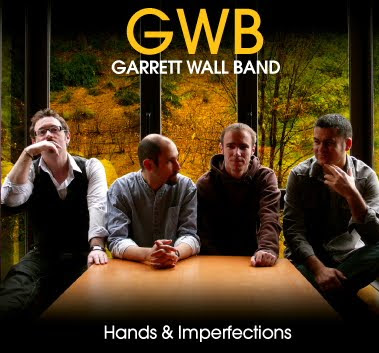 Garrett Wall has been a feature in the Irish music scene since his debut album in 1994. The second album and his most successful to date was released in 1997 and included some great singles. According to the GWB biography Garrett went to live in Spain to escape music and found a whole new beginning. The Garrett Wall Band consists of Garrett Wall (guitar/piano/voice), Howard Brown (trumpet/voice), Robbie K. Jones (cajón) and Dave Mooney (bass/doublebass). The debut album 'Sky Pointing' was released in 2007 and the follow up is 'Hands & Imperfections'


I'm fast becoming a big fan of the Trumpet and this album is awash with it's sound. The songs are really typical of Garrett's solo career. They are well crafted pop tracks with clever lyrics and nice melodies. However the songs really do benefit from the range of Spanish influenced instruments on offer above.

Standout tracks include the wonder 'Is There No Freedom', 'Better Days' and 'The Ballad of an Exorcism'. Garrett's voice is as good as it was when I was a big fan of his solo work back in 1997. 'Hands & Imperfections' is a really good pop-rock album.