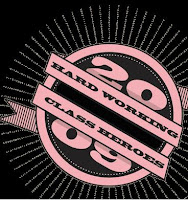 The afternoon industry panels were hugely enjoyable and informative in The Button Factory. The Media panel discussed the future of music promotion on a whole with emphasis on getting the best from the online resources available. The 'TV on the Radio' panel opened up a whole different side to the music industry that I never knew existed.


Ollie Cole in The Button Factory

A decent sized crowd turned up for the early evening gig time of 7.10 for former Turn front man Ollie Cole. There was a stupid rattle noise from the stage which simply pissed me off. I was expecting a low key performance from Ollie but the songs are in the main more indie than the expected Elliot Smith influenced folk! A fine set from a fine performer.


Land Lovers in The Button Factory

The five song set from Land Lovers showcased their songwriting talents. It was a solid performance but there isn't much to write about!

The first thing to note is the folk image the band offers on sage. However it's a odds with the KOL/Killers imspired indie rock. The penultimate track was really good but again I wasn't really impressed.

The best way to describe Ali & the DTs is to imagine if The Commitments went Country Rock instead of Soul. There were ten people on stage and it was a mess. There was a wall of sound blasting from the stage where nothing made sense. I'm listening to their songs on the breaking tunes site and they sound great! They need to sort out their live performance.

I have listened to the debut album from The Holy Roman Army a few times but seeing the band live brought the album to life. There was a really good crowd for the band and the band were on top form.

My night ended with seeing and hearing Valerie Francis for the first time. She performed well at a difficult pre-clubbing time slot. I have to make sure I buy her album soon.