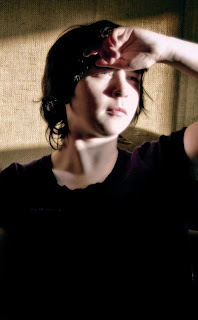 I have read many great things about Lisa O'Neill recently. I was also told by a few people how great her debut 'Has An Album' is and I have tried my very best to ensure I am impartial in my review. Lisa originally from Co. Cavan was Elder Roche's support act on Wednesday night at The Button Factory and on the back of that fine performance from Lisa with her band I invested €10 in her beautifully packaged debut album.

'Has An Album' is a collection of beautifully written folk ballads intertwined with poetic lyrics and insightful imagery. The band in The Button Factory consisted of Vocals, Guitar, Mandolin, Accordion and Irish Harp. Additional instruments on the album include Piano, Cello and Double Bass. Lisa has a very distinct voice which reminds me of a quieter Lucinda Williams or Martha Wainwright.

The overall mood and atmosphere of the album is of an artist on a very personal reflective journey. There's a wonderful tribute to Bob Dylan [Bobby D] and an upbeat tune consisting of nursery rhyme quotes [Pocket Full of Piggies]. In the main the songs are about friendships, relationships and astute descriptions of simple life; "I think those hands around my waist, but I've been drinking so long I can't taste".

I'm finding it difficult to pinpoint an exact aspect of 'Has An Album' that has me so spellbound. I think the simple fact that I am so taken by the album means that this album deserves the highest rating on my review scale:

In many ways Lisa's debut reminds me so much of my favourite album ever which is Mark Dignam's debut album 'Poetry and Songs From The Wheel'. Both albums contain great songs, beautiful singing and insightful descriptive songwriting.