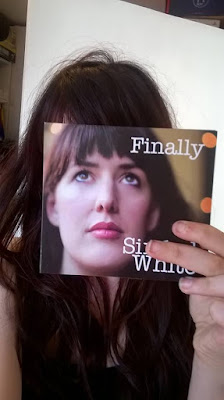 After a number of years on the singer-songwriter circuit touring all around Ireland and performing on many a festival stage, Sinead White has 'Finally' released her long awaited debut album. 'Finally' gets launched on Saturday May 30th with a gig in The Sugar Club with a full band and a large choir of 'Kazoo' performers [Sinead's audience participation part].
I've enjoyed listening to 'Finally'. The 10 tracks are varied, some are acoustic guitar based songs, others feature an amount of jazz piano style that reminds me of Michelle Shocked while on every track there's opportunities for Sinead to extend her amazing vocal range. Sinead has the ability to effortless switch from being charming to being full on dramatic to nail home the importance of the lyrics. It makes for a mood changing, swooning feel throughout the album.
The subject content of many of the songs are relationship based. 'Poor Little Rich Boy' and 'Rollercoaster Man' have no holds barred lyrics that hit the spot. "Sometimes" is my favourite song on the album. It's simply gorgeous with it's amazing heartfelt lyrics with Sinead's vocals shining through.
There's a few pop songs in there such as the radio friendly opener 'Better', previous single 'Flat Battery' and the kazoo assisted 'Mouth Organ'. 'Finally' also finished with the most ambitious full band song on the album entitled 'the End' which delivers a highly satisfactory close to a really good album.
Sinead White - Finally [8 out of 10]
https://www.facebook.com/sineadwhitemusic
Abner Brown's Sinead White The Sugar Club