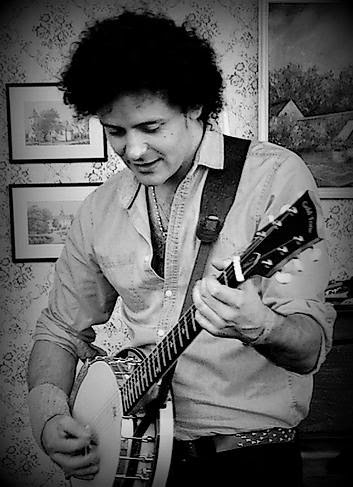 Interview with James Cramer from Tupelo
by Charlotte Jakobsen

How did you become interested in music and songwriting?


Hearing Van Morrison when I was very young about 10. His voice hit me right to the core. The purity, honesty, beauty and balls of it astounded me and made me go out and buy all of his album's bit by bit, scraping the money to get them over the years. Then reading up on him he made me go back to the blues, country, folk and jazz, I began playing guitar then and hated learning other people's songs, I never wanted to do it and wanted to write my own compositions as soon as I could play two chords, singing other peoples songs didn't turn me on so I began writing.

How would you describe your music?

Curly, like my hair, not straight, a little bit funny, not for everyone but honest.

You got the inspiration for your first solo album “The lights of Lisnakay” from the poems of Matt Duggan. Who else inspire you?

Painter's really get my juices flowing. I go to galleries all the time and I love the freedom and madness of it all.When I go to a great exhibition, I marvel at that. Whether it be Sean Scully or Monet I just respect the work and it makes me want to up my game as someone who creates thing's.

What can the audience expect to see at a Tupelo concert?

Myself, Kev, Damo and Paul give our all every night. And you will always believe us when you see Tupelo play a show whether you are into it or not. Expect never to see the same gig twice, every night is a surprise.


2014 was a very successful year for Tupelo. What were the highlights?

The highlight is writing the songs and getting them down with the band. I'm not one for looking back and admiring what we have done or beating myself up over what we didn't do. It always, always about what's next. But at a push, Vetvika beach last July, Norway, was very special though. They expected 3-400 people. 2000 people came, you could only get to the gig by boat or a four hour hike. They hadn't enough boats to bring the people over so we could have had another 1000 people. We came around into the bay on a little rib doing 80 mile an hour, there was myself the band , two journalists and the promoters, our instruments were brought on a ship earlier. We came around the corner, the mountains stood around us like the gods leaning in on the beach, it was the most spectacular place for a concert and the bay was packed with yachts, motor boats and hundreds of hikers coming over the mountain. We were 2 hours late because our boats engine broke down in the north sea. So 3 flights, 3 boat rides, 2 taxis and one tour bus later we made it. It made national news in Norway on the TV, front page news in the paper's, they have wanted to put a gig on there for forty year's, and Tupelo did it, no better buachaillí.


In 2014 Tupelo played many sold out gigs in countries like Holland, Belgium, Russia and especially Scandinavia. Did you find it different to perform there compared to playing in front of an Irish audience?

What is the wildest/funniest story you can tell from your 7 years with Tupelo?

Mmmm. At a festival in Scandinavia we were back stage after our show. We were a bit bored. There was a digger (JCB) there for some reason and wouldn't you know the key's were left in it. Myself and Kevin brought it for a drive around the harbour and up through the town, we were for those few hours, the grand Marshalls at the St Patrick's Day Parade waving at the lovely folks and giving them our love from the Tupelo float.

We are working on album no.3 and working on new material is a weekly thing in the band. There will be plenty of travelling and touring as we hit new territories. Outside of that I have been writing, recording and collaborating with numerous solo acts and band's that will come to fruition throughout the year.