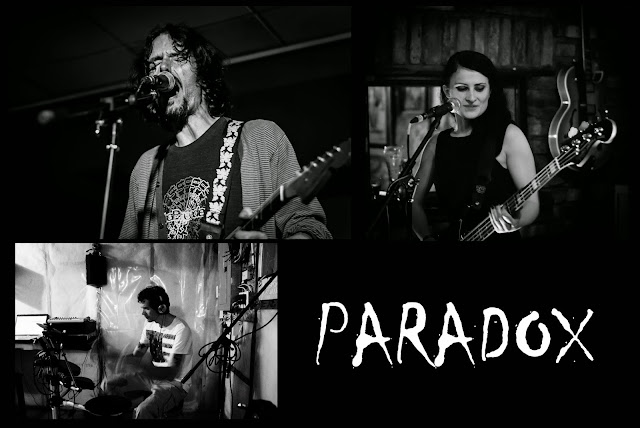 1. Who are you?
- I'm Pete Mac from the band Paradox. We are a 3 piece Alternative Rock band. I'm the singer, guitarist and songwriter. The band was formed in 1997 by my brother/drummer Mike and myself.

- We've released 4 albums to date. Our debut album 'Circle of Growth' was recorded in 2000 and released on a US indie label in LA. The following 3 albums were DIY albums without a label. We shot a music video for our track Mr. Bureaucracy taken from our last album 'Corporate Pollution'. The video was nominated for the Berlin Music Video Awards 2013, The Portobello Film Festival in London and the Dublin International short film and music festival in Dublin. Here's the video if you have the chance to check it out - https://www.youtube.com/watch?v=QUVxYKrKULQ
Track 'Repress Excess' also from 'Corporate Pollution' was part of a soundtrack to a Canadian horror movie titled 'Truth' which screened at the Cannes Festival and also won an award at the Canada International Film Festival.

- We recently released our 4th album in January titled 'Chapters'. The new album has been a working progress for over a year which originated in September 2013. The album was recorded at Wavefield Recording Studios in Bantry, West Cork with musician and engineer Brian Casey behind all the production, mixing and mastering of the album. The track 'Nothing Lasts' was chosen as the first single from the album and also has a music video to go along with it - https://www.youtube.com/watch?v=2FQBRZLg1nM
We are currently working on a new music video for the second single titled 'Eat'.

- Hmm well we are an Alternative Rock band with a 90's Grungy feel to our music so people say in the year 2015. We've always released full length albums as opposed to EP's. We're big fans of proper albums so we always took the time to record a full length album in the studio. Our new album has the addition of Cello thanks to Maeve Kelly which is something we didn't have on our previous albums. My brother Mike and myself played everything as a 2 piece every time we were in the studio recording an album. We've gone through many bass players. We now have female bassist Jette playing with us for the past 5 plus years.


6. What is the best song ever written?

- Tough question. I guess it's a matter of preference here really since I can think of loads based on when I heard the song in my life.. so for me at this point in time I would have to say - Jeff Buckley - Grace

- Again there's a ton of great albums so from my own preference and as an album and band that changed my life it has to be Nirvana - Nevermind.

- We are currently shooting a music video for our new single titled 'Eat' from the new album. The track was inspired by the documentary 'Earthlings' and focuses on the treatment of animals in todays society. The video will be a reflection of this. Phoenix Pictures are behind the production and we're aiming to do a stop motion type animated video which is something we haven't done yet. We're planning further shows both in Ireland and abroad to promote the new album. We also have 3 dates in April lined up playing the music of Nirvana with fellow Cork Rockers Screenreader. We organised something similar last year to mark the 20th anniversary of Kurt Cobain which started in Cork and ended up going as far as Galway. The turn out was so great we thought we would do something similar again this year. Titled 'Smells like Nirvana' we currently have the following dates ::

- People can buy our physical CD's from CD Baby - http://www.cdbaby.com/all/paradoxrock
All our albums are also available digitally everywhere from iTunes, Amazon to Spotify.
Here's our new album 'Chapters' on iTunes - https://itunes.apple.com/ie/album/chapters/id958282470
Streaming on Spotify -
https://play.spotify.com/album/2VEHv3yC4D3Twh4ReBRBSW

It can also be downloaded on Bandcamp -
http://paradoxgrunge.bandcamp.com