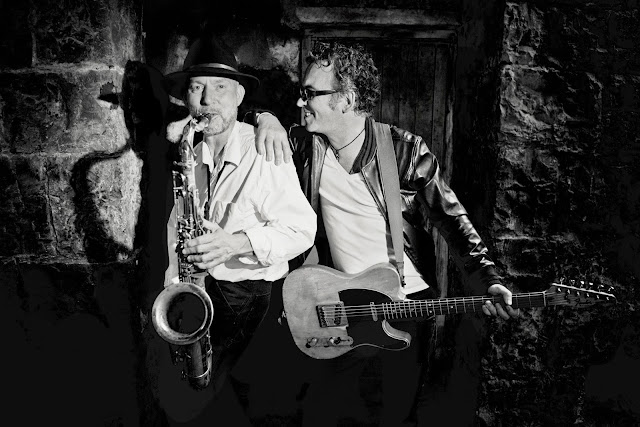 
Leo, whilst The Saw Doctors have been taking a break, you have been very busy with new projects. Can you tell us more about your involvement with Cabin Collective and Leo & Anto?

Knowing that we were going to be on a break for a while, Anto and myself were eager to keep busy. We fell into a group of friends and fellow musicians who were accustomed to rehearsing and recording in Larry Kelly’s log cabin, a few miles outside of Tuam. Noelie McDonnell and Keith Mullins had recorded albums of their own out there and Anto Thistlethwaite and I joined in the crack which led us to putting a group of nine and sometimes more musicians onstage under the name Cabin Collective. We played some gigs, released two singles and were on the TV a couple of times but despite the amount of talented musicians, singers and writers on the stage, it was hard to get gigs and get people to come to them. It was also difficult to get all the musicians at any particular gig, never mind rehearsal!


Around the same time Anto and I were figuring recording an album and trying our hand at maybe doing a few house concerts in the US – a new trend we’d just found out about. We recorded ‘Flyin’ It’ in Anto’s loft and jumped in the deep end with a tour in the States of small venues and some house concerts, which, we were very delighted to realize, actually worked. So we’re still at it.

Was it difficult to go from touring with the Saw Doctors and play big events like the Volvo Ocean Race in Galway in front of 50.000 to do small acoustic gigs and intimate house concerts with Anto?

It wasn’t difficult; different of course. And when I say it wasn’t difficult, it’s not fully true because in many ways, smaller gigs are more intense and more intimidating; plus there’s only the two of us onstage for the whole set – we don’t get to hide off in the wings twiddlin’ away at a guitar. It’s full-on from start to finish. So I’ll revise my original answer – yes, it was a bit more difficult for sure.

Can you tell more about the two albums “Pushing it” and “Flying it” that you recorded with Anto?

They’re mostly our duo versions of Saw Doctors’ well-known, and not-too-well-known, songs: there are a few of Anto’s own songs and there are a few of our songwriter friend, Padraig Stevens’ songs which we’re delighted to have on board. The albums are quieter affairs, similar to our gigs – we recorded them in a simple fashion, not just for convenience but also so that if people bought the CD because they liked what they heard at the gig, it would be pretty much the same version.

You have just come back from touring Russia for the first time. How was it?

Interesting to say the least. Extremely hospitable; we were looked after like visiting kings – when we stayed in peoples’ houses the food was not only delicious, as it was everywhere over there, but it came out in such plentiful supply I think we put on a stone weight each. It was funny doing shows where the lyrics were almost inconsequential but the gigs all worked and we were very warmly received. We were kind of like exotic foreigners – in a gorgeous city called Vologdad, our taxi driver said that we were the first ever foreigners he had ever driven in his car. We skied across the mile-wide frozen Volga, took sleeper-trains through the night on three occasions and loved it all.

When you wrote songs like Red Cortina 20+ years ago, did you ever think that they would stand the test of time and still be popular and relevant today?

I didn’t think it but there may have been times that I would have hoped it. It’s such a privilege to have people singing the likes of Red Cortina; so lovely that it means something to them. It would have been one of my dream-like ambitions that such a thing would happen when I started trying to write songs like the other lads making up songs around me and the dream came true. Amazing.

The Saw Doctors have had an amazing career. What have been the highlights so far?

While the big days out are obvious milestones – the big West’s Awake Festival in Tuam in 1991, the Fleadhs in London and across the US, the IRMA Lifetime Achievement Award, the hit songs – I always loved the ordinary gigs in the middle of tours; no fuss, no fanfare, just a band going out doing its job, playing as well as it can for the loyal people who’ve left their home to share the evening of music and song with us.

You have toured all over the world. Do you find it different to play in front of an Irish audience compared to an American or even a Russian audience? Where do you receive the best reaction?

The Irish audience is the acid test, in my opinion. They know us better than anyone else can and if a song works in Ireland it’ll work anywhere else in the world. But in general, the more you travel the more you realise people are so similar no matter where you go. And there’s no location where you receive the ‘best’ reaction – there are venues that are consistently and dependably ultra-hospitable, but you never know when the stars may align, it may be one of those ‘bread and butter’ gigs I referred to above, when the band hits top form and the audience is in some special frame of mind and the connection is special, and you can never see it coming.

What makes a good song?

If I knew what made a good song I’d be writing them every single day. But it’s not that easy to define. It seems to me what makes it good is if people can relate to it and find some part of themselves in the words and music – sometimes this can be a very upfront, straightforward type of connection, sometimes it’s more vague. While it’s most satisfying to write songs that connect with people you have to write stuff for your own expression as well, which may be classed as ‘good’ in its own way. But for a song to be any ‘good’ at all you have to put something of yourself into it and share something of yourself; it’s hard to put a finger on.

What advice would you give new upcoming singers and bands?

I wouldn’t be great for giving advice to people; I really only know how it worked and didn’t work for us. I think you need to love what you’re doing, be persistent and hopefully stumble upon a bit of luck, basically.

Recently you and Dave Carton played a pub gig in your home town Tuam - and with rumours circulating that the Saw Doctors will be playing at the Sugar Beat Festival this summer, I wonder if you can reveal any plans of touring this year.

We have no definite plans as yet but it doesn’t look like The Saw Doctors will be back onstage at least until the end of 2015 and maybe into 2016. We had a good oul’ bash in Tuam a few weeks ago and it was very encouraging to see that people were getting the same buzz out of it so hopefully we’ll get back at it in time and we’ll try and be as good, if not better, than we were when we started the break.

Leo and Anto will be touring America and England this summer.