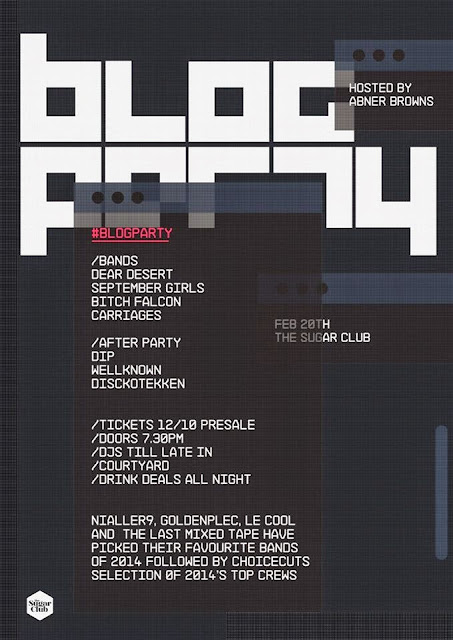 
The 'Blog Party' event in the Sugar Club brought some of the best up-and-coming acts and DJ crews of 2014 to the stage, with the range of styles on offer reflecting the diverse Irish music blogs who had chosen them. MC for the night was Abner Brown and they did it in style.


First up was Nialler 9’s choice Carriages, who blend producer Harry Bookless’ field-recordings with rich electronic layers and the stunning vocals of Aaron Page. They may have been the openers, but for me, they were the highlight of the night and set a high bar for those who followed.


Next was Le Cool’s selection Dear Desert. Having seen them before (http://www.ceolcollective.com/reviews/gigs/live-review--columbia-mills---whelans-upstairs-nov-29th.html) I knew what to expect, and they didn’t disappoint. Channeling the 80s but avoiding cheesiness is a tricky one to pull off, but Dear Desert do it in style. I’d be surprised if they aren't snapped up by one of the big labels soon.


The Last Mixed Tape chose September Girls, who brought their noise pop sound to the stage with tonnes of swagger. While not my personal taste, they were the first act of the night to get people to the floor and were a real crowd-pleaser.


However, the final live act, Goldenplec’s pick Bitch Falcon, were the ones that really got the crowd going. Bursting onto the stage with massive riffs and a loud, grunge sound, Bitch Falcon were the perfect closing live act as there were few not on their feet by the end of the set.


Wrapping up the night were Choice Cuts best of 2014 DIP, WellKnown and DiscoTekken, who kept the party going well into the wee hours. A unique idea that created an opportunity to showcase some of the diversity of home grown music around at the moment, the Abner Brown’s Blog Party was a real musical treat.