Look Out & Under by Hazey Lake 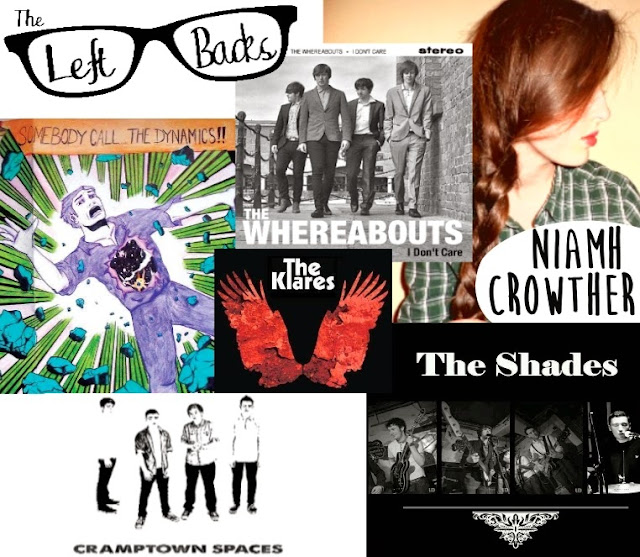 So making the statement that music is everywhere is sort of an understatement of sorts. In Ireland it seems to be bred into us and if we are lucky ones, we can get spectacular at an instrument or we might have vocal chords that stun an audience into silence.

Unfortunately as a young person, (someone who is under the age of 18) it can be very difficult to find places to play and to promote your music or even to just be taken seriously. Most musicians have to play the pub scene and when you are not of age that kind of ruins it.

Over the last few months to a year, I have seen and met some wonderful young performers, who have had music through their life and want music to stay in their life. As it is coming to a new year, I decided to make a "Look Out & Under" list. Acts that you should all keep a "Look Out" for who are mostly or all under the age of 18, maybe one or 2 of the members might be just turning 18 but they are still in school.

The Klares are 4 teenagers from Dublin who got together to form the the band in 2011.2014 has seen them play some top venues in Dublin - The Convention Center, The Workman's Club and the Aviva Stadium to name a few. Last year they recorded their first EP 'Dirty Birds which got a great review from Golden Plec.They toured LA where the played for You Bloom festival.

Cramptown Spaces are a young southern-soaked garage rock quartet delivering bone-crunching, authentic rock music that finds its roots in a back catalogue of blues, progressive, punk and psychedelic music. With a showcase on RTE Two’s Music Inc, Two EP’s under their belt, a performance to a full tent at Electric Picnic 2014 as well as being named TodayFM's band of the week in October 2014, Cramptown Spaces are certainly one to watch in 2015.

Niamh is a 17 year old singer-songwriter who resides in Meath. She was part of the winning Irish Youth Music Awards (Irish Youth Music Awards) Meath team in 2011 and took part in the album and even got a nice little review of her tracks in Hot Press. In 2013 she was chosen to front the Meath team in the Liberty Hall at this years IYMAs and ended up winning. The IYMAs album 'Kids A' is available now along with Niamh's single 'Bullets'. Niamh is a Leaving Cert student at present and will hopefully have great plans in place for a brilliant summer music wise.

The Left Backs are an Indie Rock band formed out of 4 guys from Belfast, Northern Ireland in Summer 2013. In the last year they've come an extremely long way, winning Best Act at the Irish Youth Music Awards and gaining endless recognition for their work from professionals across the industry. Their catchy and entertaining originals have made sure of that.
They've recently shared the stage with the likes of Union J, Plan B and Chase and Status.
They are currently gearing up for the release of their debut EP - Fake ID, which promises to be something special. The Left Backs are definitely a band to watch and are almost guaranteed to go far.

The Whereabouts are a young, energetic four piece rhythm & blues rock'n'roll band from Kingscourt, Co. Cavan, Ireland.
Formed officially in early 2013 after many years of jamming together when Wayne Watters Reilly (lead singer/rhythm guitarist), Evan Murphy (lead guitarist), Joseph Adcock (bassist/backing vocalist) and Dara Curtis (drummer) all came together and shared their love for playing music by forming as a band.
All four lads in The Whereabouts have been playing music from a very young age under the influence of their parents and bands such as the early Rolling Stones, The Beatles, Dr. Feelgood, The Doors and Chuck Berry.
The Whereabouts have been gigging since they formed playing around the pubs, clubs and festivals of Ireland. The band is known for their liveliness and passion for the music whilst playing on stage.

The Shades are a five piece rhythm 'n' blues / rock 'n' roll group from Dublin. Made up of five hardworking, accomplished musicians and taking inspiration from artists such as The Rolling Stones, The Beatles, Chuck Berry and The Yardbirds, The Shades are on their way to bringing this raw rock'n'roll sound to the mainstream.

The Shades performed @ Body and Soul Festival in June of 2014 to an energetic crowd. In July, the group began releasing a series of YouTube videos showcasing the raw, back to basics ethos of their live performances entitled the 'Live Sessions”.

In September 2014, the group set out on a successful tour of the UK and Ireland. The Shades were superbly received in cities such as Manchester, Liverpool, Cork and Limerick.

With non-stop energetic live shows and plans for a debut release in 2015, The Shades are definitely a group on the rise.

"Several of their own numbers...could be hidden songs from The Beatles debut album ‘Please, Please Me" - DublinConcerts.ie