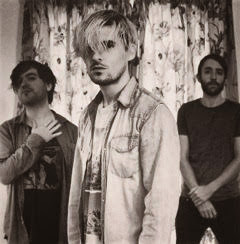 We're delighted to have this young punk band Fanglcub featured in this interview. Get to know Fangclub now!

KEV: Im Kev, I play bass and scream when necessary

STEVIN: Right now we're based just outside of Dublin.

KEV: Small town cabin fever so we're eager to tour as you can imagine

KEV: Getting down to the last 100 out of thousands for a Glastonbury competition was pretty surreal.

STEVIN: We just finished recording a record, so right now we are resting our ears and brains. We have one or two shows over December.

DARA: We are doing a lot of planning for next year. It's going to be HUGE!

KEV: Prepping for touring in the new year. A lot of planning but its all worth it.

5.    Name something unique about you or/and your band?
DARA: We have been described as "a 3 piece, louder than any 5 piece band". The highest compliment in my opinion.

STEVIN: I have no idea. Something by Elliott Smith, maybe "Christian Brothers".
DARA: Off the top of my head? "Times Like These" by Foo Fighters. Sound just as good when played acoustically.

KEV: That question hurts my brain to think about so I'm gonna play it safe and say a Beatles song. I'm gonna go with "The End"

STEVIN: "Everything Is" by Nine Black Alps. Forever.


DARA:  I think Queens of the Stone Age's recent album "…Like Clockwork" is pretty damn flawless!

KEV: Ok this is slightly easier haha. "Three Cheers for Sweet Revenge" by My Chemical Romance probably had the biggest impact on me musically and mentally when i was growing up so I'll go with that. Still a tough question though.

STEVIN: We're touring most of next year! Starting with Ireland in January. I'm restless right now, I just wanna get out there already.

DARA: The studio is always fun, but playing live is what it's all about for me so I want to do that as much as possible.

9.   Where can I spend money on you or your band?
KEV: At gigs. We sell tees and CDs at most gigs so come look for us after the show and say hi.
STEVIN: Check us out on fangclub.bandcamp.com