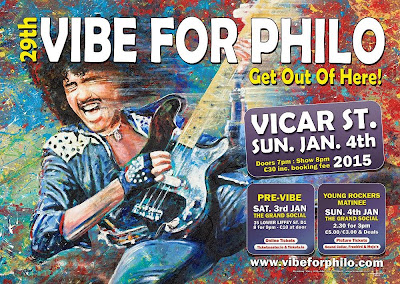 Conor Scott makes a welcome return to the Vibe, appearing in the difficult second slot at 2015. It’s “nottabother” to the Belfast boy whose promising a Dylanesque twist to his 2015 performance.

The Low Riders are back  with an eclectic mix which will see them introduce keyboards for the first time. While not entirely anchoring their set in the Snowy White era you can expect several songs which have never graced the Vibe Stage before.

The last of a line of Great Irish Guitarist from the 1970s Pat McManus fairly tore the roof off Vicar Street at the 24th Vibe in a short but poignant set. This time round he has the time and talent to really let rip!

Celtic Reggae merchants The Barley Mob will be turning their considerable crowd pleasing talents to the Lynott songbook in a set which spans the ages. Are you Ready?

Bad Reputation - featuring Lizzy Tribute veteran Flash Murphy, will be sending them home sweating with a full on “Live and Dangerous” set. Greatest hits with some personal favourites, and a brace of guitar-gods to please the most hardcore supporters.