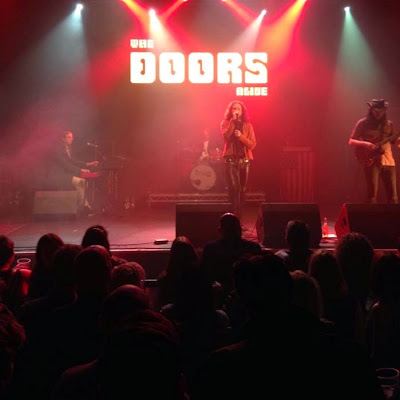 To win 2 tickets for The Doors Alive in The Academy this Friday all you have to do is share this article on twitter before 6pm Wednesday and include @ceolcollective in the tweet.

The Doors Alive will return to The Academy for a very special midnight show on Friday 5th of December 2014. Tickets €15.00 including booking fee are on sale now from www.ticketmaster.ie and Ticketmaster outlets. The Doors Alive never fail to impress, having garnered a strong fan base they continue to sell out shows in Dublin.
The Doors Alive are widely regarded as the closest and most enthralling representation of the legendary 1960's rock gods The Doors in the world today. The Doors Alive most recently played to 3,000 people as headliners at Rock Radio’s Monsters of Mock event in Manchester and two special shows in Europe last summer to commemorate the 40th anniversary of Jim Morrison’s untimely death in Paris in 1971, the Melkweg in Amsterdam and La Cigale in Paris. The band re-create the sound, look, presence and magic of a real 1960's Doors concert, perfectly and effortlessly transporting the crowd back in time with classic hits such as 'Light My Fire', 'When The Music's Over, Riders On The Storm, The End and many more.

Willie Scott captures the look, attitude, and rich baritone voice of the late, great Jim Morrison with ease while his compadres showcase the musical chops of original Doors members Ray Manzarek, Robby Krieger and John Densmore with finesse and skill. To achieve that authentic Sixties sound, the band use the very same instruments that members of the Doors originally used. These include a vintage Fender Rhodes Bass keyboard, a vintage Gibson keyboard and a vintage Gibson S.G guitar.

The Doors Alive
"Truly AMAZING... They capture the true spirit of The Doors" Zane Lowe, BBC Radio 1
"The best tribute band I have EVER seen" Clint Boon, XFM

They have left awestruck audiences all over the world and repeatedly sold out some of the most respected venues in the business, including 02 Academies all over the U.K and Ireland. See them play live at The Academy for a special midnight performance on Friday 5th of December 2014. Tickets €15.00 including booking fee on sale from Ticketmaster. Doors open 11.30pm.