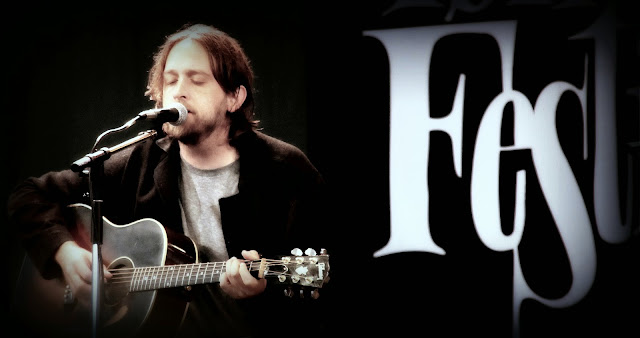 For me 2014 was a great year for live music. Looking back, my favourite concerts were undoubtedly with the 36-years old Texan singer-songwriter Hayes Carll at Tønder Festival in Denmark.

Since releasing his first CD “Flowers and Liquor” in 2002, he has toured non-stop in America and Canada and won the hearts of both fans and critics alike.

Numerous times he has won best song and best album on the American Songwriter/American Music Association scene and been on Rolling Stone´s best single list in 2011. He has even 4 songs in the Oscar-nominated Gwyneth Paltrow movie “Country Strong”.

He is probably best known for the song that almost did not get recorded “She left me for Jesus”.

It was voted best song at the Americana Music Award in 2008.

So why do fans and critics love Hayes Carll so much?
For me, finding an artist who can combine song writing, live performance and storytelling at that level is very rare. He is incredibly funny and spices up his sometimes slightly depressed songs with great stories from his own life. He delivers his great sense of humour in an understated slow Texan way when he shares how awkward it was to win a gun at a raffle or how his chicken song made it into an ad.

In an interview Hayes Carll said that he gets inspiration for his songs from what he sees and what crosses his mind. That pretty much seems to be limited to women, drinking and feeling depressed. All this perfectly combined in the song “One bed, two girls and 3 bottles of wine”.