Posted by Unknown on March 09, 2014
I was lucky enough to catch up with Cat Dowling for a chat on Friday to discuss her recent success, the creative process, and future projects . Cat really gives the impression of a woman who really knows what she wants and has the confidence in her own ability to achieve it. Cat plays the inaugural Odessa Live "Culture Vulture" in the Odessa Club on Dublin's Dame Street, on Wednesday night (March 12th). The show is at 8pm and tickets are only €10. Pop in if you are around the capital. With comedy on the night also being provided by Eleanor Tiernan it is bound to be a real treat. 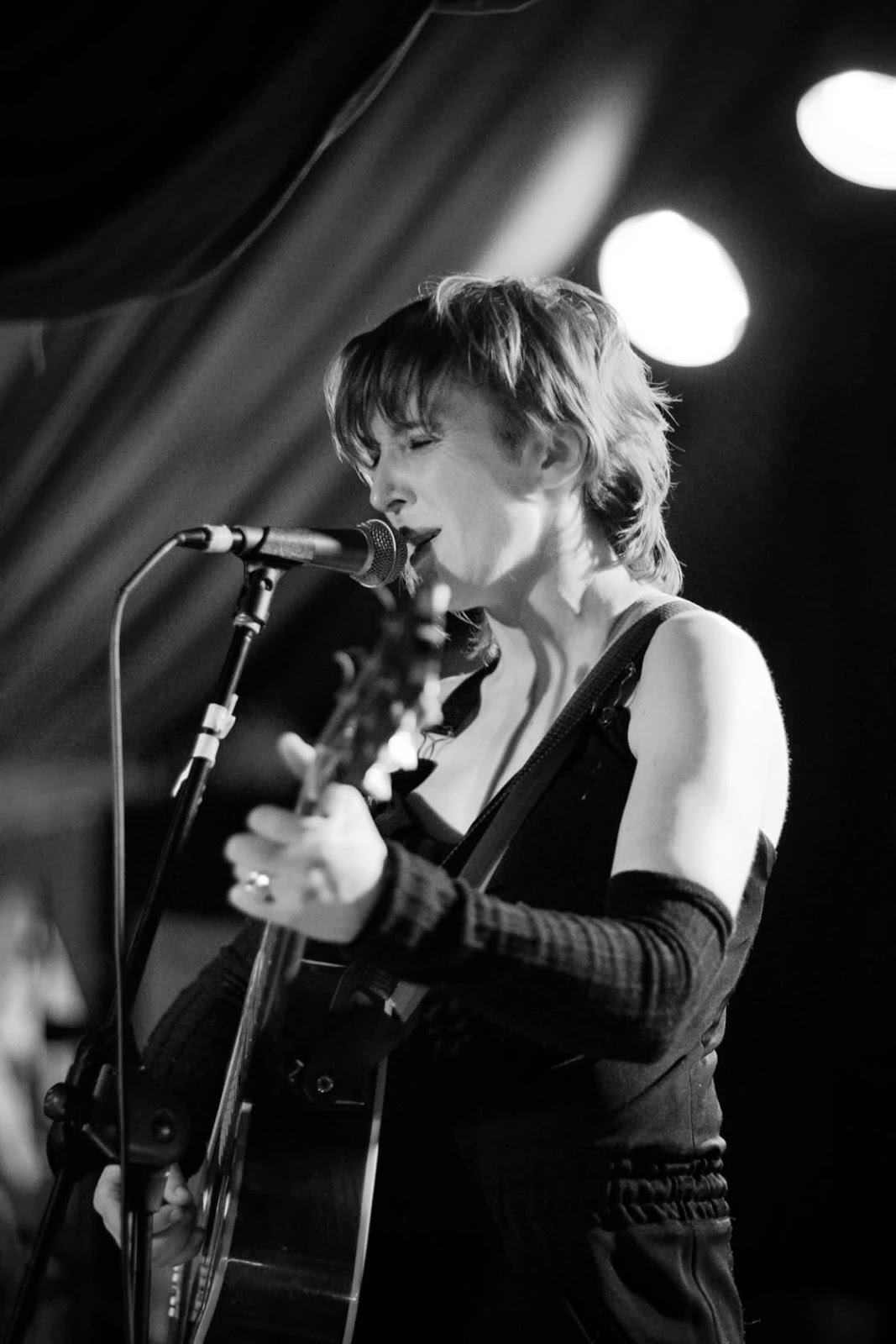 2UIB: So Cat, you're well? Things seem to be going great for you?

CD: Yeah, things are, things are busy out! I'm hoping to get in and get another album started at the end of March. So, that's the plan. For better or for worse as they say. Feck it, keep chugging, that's my plan.

2UIB: So yeah, your song, The Believer (video below), recently featured in an episode of hit US TV show Banshee, you must be absolutely over the moon about that?

CD : Yes, it was nice. I haven't seen yet, I don't have time! It's by Alan Ball, well he produced it, and I don't know if you remember, years ago, he did Six Feet under. I was I big fan of that. It was the only thing I used to watch on TV. So that's kinda cool, like it's blood and gore and the usual, but at least I like him. I think I got a lovely slot on it as well, so it was really nice.

2UIB: Have you had much of a reaction from it?

CD: Kind of, yeah actually. I've been asked to do remixes and have had a good few people getting in touch. I suppose it's a little bit weird because it's not your mainstream TV, but yeah it's nice. I've had a nice reaction and there are a few other little things in the pipeline that I'm now waiting on to be confirmed. You know, a few potentially nice things on the horizon as well.It's great because the creative teams behind a couple of those shows are big fans of what I do, so that's a big plus, an extra bonus if you will.

2UIB: So any plans now to head over to the States on the back of that?

CD: I was over in the states in October, and that was great. It was fabulous! There's another single coming out in the States, probably in May, so I might do something over there in maybe January of next year.There's a bit of a PR thing, a few bloggers are kind of getting what I'm doing. It's weird, but it's great you know, meeting people who have been listening to what I do and coming to the shows. So it's all kind of organic unless you have a big big record label behind you and I'm very much grass roots, if you know what I mean?

2UIB: Now, the stuff you are working on, your solo album, it's a big step away from what you were doing before with Alphastates. Is that more you now making the kind of music that you have always wanted to make, or is it just the way your style has naturally matured?

CD: Do you know what? It's maybe a bit of both. I suppose it's the experience. When I started out, I hadn't an absolute clue and I sort of stumbled into it. I was always very passionate about music, but I didn't really realise I had a talent. I don't mean to sound arrogant by saying that, but I didn't know I kinda had a knack for writing songs. I discovered that talent a little bit later. I started out with Alphastates and I didn't know how anything worked. It was very much a D.I.Y. kind of a thing that was going on in Dublin at the time. I remember bringing out a song called Sometimes. That was one of the first things we recorded. We genuinely had no idea how things worked and someone just said we should drop it in to RTE, and suddenly it's getting played all over the place. Then you're kind of veered into a little bit of a pop thing. People are telling you that you need another song. So you end up writing for what you think you should be writing for. Which is totally screwed up, I think. You must do what you really like. It's like with anything, you must be true to what you do. It must come from your gut, and then after that it's a risk. You don't know if people are going to like it or not, but at least you have something that's honest and comes from yourself. I don't mean "earnest" honest, but that you are writing it from you as opposed to what other people want you to do. If that makes sense? That's really important for me.Even with my next album, I had to write what I really like, something that I can stand over. Because if you do something you like, there is a good chance other people will like it, but if you don't love it yourself, I think you feel like you're a bit of a fake.When you stand up and sing songs that you don't really believe in...That's not a great space to be in.

2UIB: You said about your current album, "I wrote  The Believer in the midst of stolen moments during ecstatic, sometimes twisted, often frenetic times." Is this perhaps why so many of the songs on the album are quite short, often less than 3 minutes long. Are the songs themselves fleeting moments, is that a reflection of where you were writing the album?

CD: Probably, yeah. Also, I had just become a mum so I didn't have time.So when you don't have time, you have to use your time really preciously. I also am not really a techie person. I don't do your iPhones or snapchats. So I would be floating around, an idea would come into my head, I'd jam it, scribble down some lyrics so it's all very disjointed, but it worked. The little couple of minutes I did have were sort of magic minutes and I'd think wow, I really like that.This time I didn't have the luxury of going away and spending from 9 to whenever, all day writing an album. This is probably how I work the best. I've probably worked the best like that all of my life. I seem to work well under deadlines. When I don't have much time, I seem to use it well. I seem to excel. I jump on it like I lion, I pounce, if you know what I mean, and grab it! I suppose it just worked. When we recorded it, it was kind of organic. It just kind of flowed. I knew what I wanted, I mightn't have been the best at expressing it but I worked with Jerry who I worked with in Alphastates, and Jerry is brilliant.He is a super musician, and he co produced it as well.We had worked together before, so we had this understanding. I was very comfortable with the people I was working with. It was nice because I knew the people I was working with, it was about the song, it was about the music. When I started out as a teenager, I was listening to Bob Dylan, Leonard Cohen, The Kinks, The Who, that kind of stuff. I was very blown away by Bob Dylan...Those lyrics. But then I went very anti-folk, I kind of totally almost spat folk in the eye. I wanted electronic, I wanted synthetic, I wanted beats...I didn't want real sounds. I was listening to the experimental, sort of Leftfield stuff and I wanted that. That is kind of where Alphastates was influenced from to a degree. Now I think I've come around full circle, I kind of want to use the contemporary fraught with real, if you know what I mean? I want it to be interesting, but I want it to be real sounds! I feel like the world has become so technical, everything is so fast, everything is "to the grid."So I wanted to add a little bit of humanity to the album. Even though you can use the technology, I wanted to make it human. I find a lot of records now are all so polished, like something from a machine. I wanted something real. Like you know with someone's voice, you hear the crack, or the breaking or the whatever. I want to hear that when I'm listening to it. I don't want to hear everything cleaned out of it. Everything sounds so clean these days. Because everything is so polished when something come's out that's raw, there is a sort off a balance. I do like when something is raw, that element of realness.

2UIB: Wow haha, that just about covers any questions that I had wanted to ask. So what's next for Cat Dowling?

CD: I'm going in to get that album recorded. It's very important for me to be creative. Any of the music or the videos that I make, I like them to be something that I want. Just so I can stand over what I have done.Sometimes I have younger people asking me for advice, or what I think of something, and I just tell them to do what they love, not to listen to anything anyone else says. You must follow your own heart, your own creativity. because that's all you have. After that it's completely out of your control.

Thanks again to Cat for taking the time out to have a bit of a natter with me. Find her on Facebook, and over at her website.