Posted by Unknown on October 06, 2013
'Baum' the self-titled second solo album from Switzerland's Baum is such an intense ride that's about new beginnings, reflective feelings and difficult separations. It's simply brilliant from start to finish. 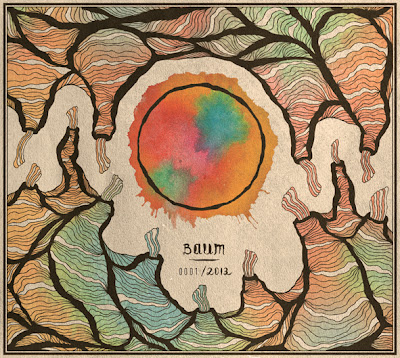 From a blogger's perspective I am privileged to hear a lot of new music before the general public gets to hear them. In the case of this album I've been listening to this on and off for a good six months in anticipation of it's worldwide or European release. However, so far this album is only available at Baum's concerts with a release date planned for the near future.

I was fortunate enough to see Baum in concert about three years ago and his intensity, musicianship and songwriting blew me away. The debut album "Music for my Landloard" is one of my all time favourite album for it's sensitivity and sentiments. It was charming and appealing with feel good tales of joy. In contrast, this album is about personal pain and despair. It's harder, harsh at times and so intense in the middle tracks on the album. It talks of missed opportunities and reminisces of near perfect pasts. It's an album of reflective moods that work together to form a masterpiece of an album.

As an art-form this album works. From the pop radio friendly opener 'Damn', through songs like 'Crow', 'Sad' and 'I Cannot Sleep' we see Baum on a journey through some difficult times which culminates in a wonderful version of Dylans 'I Shall be Released' before we get to a delicate ending of epic proportions in 'Center of Town'.

While the songs are all from Baum himself, this album has the feel of a 'band collaboration' and therefore is not a conventional 'Singer-songwriter' album. In fact like many greats, it's hard to label a genre to what Baum does so effectively.

Song that have embedded themselves in me through the months of listening to this album include 'Sleep Now' and the wonderfully written song 'Paris' where we find Baum in reflective mode after the end of a marriage.
..."and I am riding backwards to Paris for a day.". My favourite track is the 'Center of Town' track that brings the album to an epic close. Dare I say it but it's almost 'Buckley-esque' in so many ways.

Keep an eye on http://baummusic.com/ or https://www.facebook.com/baummusic for details of where you can buy this incredible album.