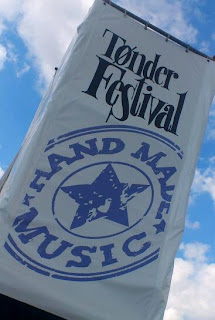 If you are into traditional music, chances are that you either been or heard about wonderful festivals like The Celtic Connections in Glasgow, Newport festival in the states and the countless festivals in Ireland and England.


But what about Tønder Festival in Denmark? Tønder just finished its 39th festival but somehow managed to keep this gem of a festival a secret abroad. This despite many musicians, who have played here over the years, would tell you that’s the best in the world.

I just come back from my 9th festival in the small idyllic town of Tønder, only 10 km from the German border and feel it’s time to spread the word about this truly amazing festival.

So what makes this festival so special and unique? It’s hard to explain really. Apart from attracting the best in Folk & Roots music every year, I think the best word to describe the festival is the Danish word “Hyggelig”. Like the Irish word “craic” it’s hard to translate into other languages – but my best try would be wonderful, relaxing, cozy, fun, and friendly.

Tønder Festival has grown from a tiny festival of 100 to 8.000 -10.000 and 2000 volunteers. However, Tønder still feels like a small intimate festival where you can actually both hear and see the bands and artists playing. A rare treat nowadays where at a lot of festival you are lucky just to see a large screen in the distance.

The festival has a big open air stage, 2 large tents, a Belgian glass tent, and smaller tents for concerts and sessions. On top of top of that, there are a few concerts venues outside the festival area. Many of the musicians stay for a few days during the festival and play small informal gigs during the day and join other artists on stage. So walking around the festival area, you will probably meet most of them which is very different from other festivals as well.


The Avett Brothers at the festival grounds. 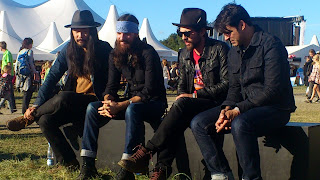 All stages and tents are within a few minutes’ walk of each other so there is plenty of opportunity to hear a lot of different music for 14 hours every day. Not only has Tønder Festival been brilliant in attracting the absolute best artists and groups but it also succeeded in presenting different genres. All from Irish/Scottish/English traditional music, Cajun, Americana, country inspired folk music to Celtic Punk Rock, New this year was Portuguese Fada with Mariza and the Australian 17 man crazy fun loving choir “Spooky Men's Chorale”.

Unlike Ireland, Denmark has unfortunately lost the tradition for folk music, songwriting, and storytelling. We don’t have many pubs here where we can hear traditional music and for many years this music genre has been very uncool. It’s been mostly associated with gray old men with white beards smoking pipes and women in home knitted woolen jumpers. To be quite honest, the average age at Tønder has been very high with most festival goers having been there every single year for the last 20 – 35 years. Last year Tønder festival wisely decided to renew the festival in order to attract a younger audience as well and this has been a great success. They also started to book young bands like Deer Tick, Deep Dark Woods, Avett Brothers that appeal to a younger crowd. Yes you still see the gray bearded men but they are now more likely to stand next to a 19 year old with Mohawk head banging to Flogging Molly. It is amazing that so many generations coming together at the same festival. Another thing that makes Tønder quite unique.

The program this year was even more diverse than ever before. Headlining was The Avett Brothers, Sinead O´Conner, Flogging Molly and Billy Bragg.

For me, The Avett Brothers gave the best concert of the festival. Their modern country/Americana rock style and ballades just blew the audience and critics away. I think that banjo is the most under-valued instrument ever so any band that includes the banjo gets my vote! Thanks Avett brothers, Mumford & Sons…

If you don’t know them, check them out!


The Avett Brothers in action.

Flogging Molly, with Irish singer Dave King in front, blew everybody away with their Irish/American Celtic punk style music and probably stopped a few pacemakers in the older crowd. It was a wild, loud, energetic and ear and sense assaulting concert but really enjoyable.

Billy Bragg is still a brilliant performer and despite getting older, he can still muster a bit of anger and resentment against injustice done to the working man. And of course he didn’t forget to say a few words about Mrs.Thatcher. At Tønder, storytelling between songs is very popular and Billy Bragg shared a story about his first gig in Denmark at Roskilde Festival back in 1996. He played the main stage just before The Pogues. After he stayed for the Pogues gig and from back stage he was supplied with beer whenever the band was (=A LOT of beer). When he was called on stage to sing the final song with them, he was really really drunk. He managed to go on, sing and then he fell over collapsing in a beer coma. When he came to himself he saw that he was carried off stage by Shane MacGowan and instantly knew that he had hit an all-time low in his life. To be more drunk than the Pogues is quite impressive.

As is often the case at Tønder, it’s the newer less-known bands that become the festival favorites. This happened again this year with 3 new Irish groups.

The new Galway group “The Whileaways” with Noriana Kennedy, Nicola Joyce and Noelie Mcdonnell was one of them. They presented songs from their new album “Wildflowers” very well and especially Noriana Kennedy’s beautiful singing was a joy to listen to on songs like “Banks on the Ohio” and “Dear My Maker”.


For 2nd year running, Dublin based Harry and Alfie from “Hudson Taylor” were a big hit – especially amongst teenage girls and their mums. They became popular by uploading cover songs on you tube and they are still to release their first real cd.


But the most fun and lively group was undoubtedly another Dublin band called Tupelo. With their Irish/American inspired music and a cheeky singer, they were showing us Danes what having a good time Irish style was all about. They got everybody joining the fun and singing along songs like “Irish man”, “Firefly” and “My family´s land”. Singer James Cramer’s solo cd “The Road to Kinawley”, with its more quiet songs, is also well worth a listening.

Tupelo in the Tea Room 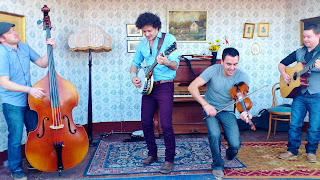 Another band worth checking out is Canadian Barr Brothers with a folk/blues/ Indies sound and the Glaswegian band Admiral Fallow with their Scottish/Snow Patrol sound. Check out their hit “Isn’t this world enough”.

Over the 4 days there were so many great bands and musicians playing that it would be impossible to mention them all.

So why don’t you come to Tønder Festival next year and join the big 40th celebrations that guarantee fantastic music, new friends and lots of “Hygge”.

You won’t regret it! See you there!