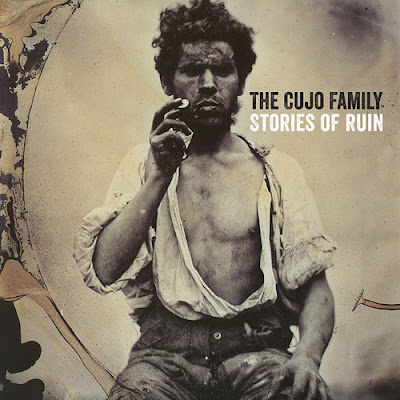 After a decent debut album released in 2010, The Cujo Family are upping their game with a fine collection of songs that merge Americana, folk, rock with a mix of murder ballads and tales of dark themes. 'Stories of Ruin' has been a great listen over the last number of weeks as both background music and songs to get your teeth into.

While singing it's praises, 'Stories of Ruin' hits a level of consistency without making the crossover to brilliance too often. The album is bookmarked with the best two songs on the album. Opening with the band's most mainstream song; Dog Gone Crazy is a perfect little Americana tune. It's got attitude, a great chorus and quality guitar riffs.

The closing track 'God in a Tree' is an epic seven minute song fit to finish any album. I love how the song builds with fine musicianship to the end.

There's enough good tunes on 'Stories of Ruin' to keep the interest up throughout. Other songs to impress are the murder ballad 'Killing Song' and the military sounds of 'Paris, The Hate in my Heart'. 'Cage Rattler' is a great little waltz as well.

With two great songs and not a bad track to be found I can only recommend you to check out 'Stories of Ruin' by The Cujo Family:

'Stories of Ruin' is released on Saturday June 29th in The Sugar Club:
http://www.thesugarclub.com/listings/event/the-cujo-story-album-launch-party