Posted by Unknown on January 17, 2011
'First' is the debut album from Scottish band 'Battle For 2nd Place' which is released on a 'Pay What You Like' basis through their website: http://www.battlefor2ndplace.com/fr_home.cfm 'First' is fine album from a talented band with an amazing vocalist.

The Battle for 2nd Place have a sound which harks back to early 1990's Seattle grunge with one exception! They are fronted by Ireland's Orla Pendergast whose vocals are outstanding on the album. On some tracks she sings with conviction and passion while on others the vocals are pure and delicate. The alternative grunge rock sounds revolve around Orla's vocals and lyrics to produce some fine songs like the album opener 'Stuck in Rewind' and the sample track 'Damage That You've Done'.


Battle For 2nd Place - Damage That You've Done by 2uibestow


The best tracks on the album for me are the last two. 'Fair on Me' is a beautifully sung track with a despairing catchy chorus. The album closer 'Held To You' is the type of epic outro the album deserves with it's feedback and two false endings. The most mainstream track is the radio friendly 'In The Morning' and is an alternative rock song of the highest standard. 'Hallow' is another fine song which showcases the outstanding vocals of Orla.


'First' is not a perfect album. There are a few songs which while not poor didn't ignite a passion in me. I think the backing vocals and the male/female harmonies could have been expanded on and I felt there was a harshness to the recording with the bass often way back in the sound of a number of tracks.


The Battle for 2nd Place have a really good debut album in 'First'! Their music is perfect for Phantom FM and I hope they gain some valuable exposure in Ireland leading up to their first headline gig in Whelans on Feb 13th. 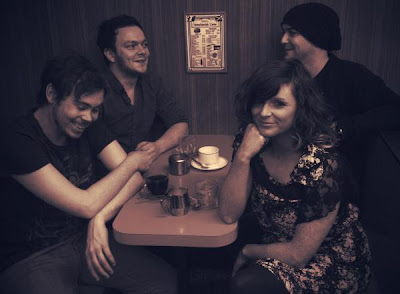 Ronan said…
I agree, the album could have been much much better.

Are they technically Scottish though even with an Irish singer?
18 January 2011 at 09:43