For The Turnstiles: Grant Lee Buffalo [copy of 4fourtyfour post]

Posted by Unknown on December 30, 2010
'For The Turnstiles' is the weekly Folk column to appear on 4fortyfour! To kick the column off in fine style I'm going to explain the origin of the name and feature 'Grant Lee Buffalo' who are making a return to the live scene in 2011.

From the age of 13 I got into music in a big way with the arrival of Grunge and in particular Pearl Jam and Nirvana. After some time immersing yourself into a genre you begin to expand and search for new artists. I went to 'The Breeders' album signing on Oct 31st 1993 and was there at the time someone asked the band if they could get on the guest list for their gig in The Tivoli. I jumped in with my name and headed with hope to the gig. The support band that night blew me away. I was at the front and a three piece who they announced were called 'Hag' produced some of the most outstanding sounds I've ever heard with wonderfully written songs. It wasn't until they played 'Fuzzy' that I realised it was Grant Lee Buffalo.

Grant Lee Buffalo released their debut album in 1993 called 'Fuzzy'. It was always accompanied by the endorsement by Michael Stipe who called it "The best album of the year hands down," and led to many support slots to diverse artists such as Pearl Jam, REM, The Cranberries, and The Smashing Pumpkins. 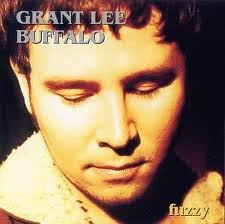 Here's Grant Lee Buffalo's version of 'For The Turnstiles' which appeared on 'Buffalondon Live EP' which was the first official release from the band in early 1993.


Grant Lee Buffalo - For The Turnstiles by 2uibestow


From 1993 to 1998 GLB released four studio albums; 1993's Fuzzy, 1994's Mighty Joe Moon, 1996's Copperlopolis and the final album in 1998 Jubilee. For me the standout tracks include 'America Snoring', 'Even The Oxen', 'The Hook', 'Drag' and 'Happiness'. However I can't overstate the quality of such songs like 'Dixie Drug Store' about a visitor to New Orleans spending a night with a Voodoo Queen, or 'Jupiter & Teardrop' about the adventures of young lovers on the run. The last album 'Jubilee' was recorded as a four piece without Paul Kimble but with the inclusion of Bill Bonk and Phil Parlapiano. It gave GLB their biggest hit in 'Truly, Truly' but it wasn't enough to satisfy Warners and led to the demise of the band.

In October of this year the blog 'Consequence of Sound' reported on the reunion of the band to perform together for selected gigs in 2011. This was meant to happen in January but I recently learned of Grant Lee Phillips injuring his leg onstage in Oslo, Norway. They have confirmed May 18th for Glasgow and will be likely to feature on the line-ups of the Summer's music festivals.


After seeing Grant Lee Buffalo once in The Tivoli, twice in The Olympia and recently Grant Lee-Phillips in The Village it really is a hope of mine to get to see this magical band again. Here's hoping it will happen!


This is a vintage video of Grant Lee Buffalo from 1994 which shows the guile of Grant's 12 string, the power of the bassline's and the intense lyrics which made GLB stand-out: Jupiter & Teardrop