Posted by Unknown on December 08, 2010
If there was ever an album which has been slow to make an impression on me it's this album. I have gone from a 'shrug of shoulders' setting to a position of real fondness for the album and the band. If you're into indie music then you should check out the album. 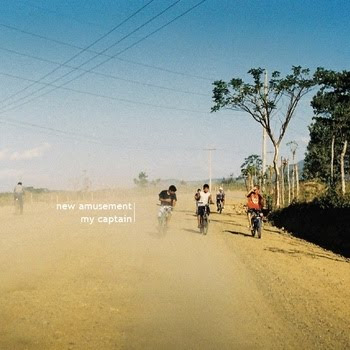 On first listen I really didn't think too much of the album. I found it disjointed and without atmosphere. I think I just needed to give the album more time. It's an album of good indie tunes which remind me of the type of music I knew existed when I was a teenager but was extremely difficult to find. To my ears New Amusement are the closet thing to bands like Swervedriver, Ride and early Verve.

'My Captain' is an album you'd easily have on in the background giving rise to a bit of head bobbing and foot tapping along the way. It does also contain songs which standout and have killer harmonies and choruses. These include 'In Patient Flight', 'Headboard' and 'Fiction'. The album has a couple of fine mood forming short instrumentals as well having some mid tempo tracks like 'Vandals' and the best track on the album 'Gone to Sea'. There's real variety and quality in this album.

I remember a few years ago New Amusement were gathering many fans and attention from journalists and the media. However 'My Captain's' release has been very low key. This amazes me that they don't get more recognition by those trend setters in the media.