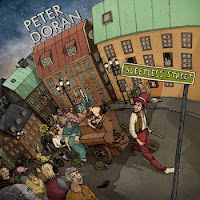 Today sees the worldwide digital release of my second album "Sleepless Street" on itunes/amazon and other major digital stores.

It was recorded and will be released independently. So to mark the occasion I thought I'd speak a little about the recording process for this album.


The first recording session for "Sleepless Street" took place in Tuscany, Italy last September. I had been invited by Producer Filippo Gaetani, who a few weeks previous had discovered some of my demo recordings online. The first songs we worked on were "Hunter's Sketches", "Sacred Place" and "Pathways". For these tracks we had the pleasure of working with the very talented Colorado-based drummer Brian McRae. We worked very quickly in the few days we had together. It was quite strange to be working on recordings with a guy half the world away. We recorded guide guitar and vocals in Tuscany and then sent the files via Internet to Brian. We would offer him some suggestions and direction and then he would go ahead and record the drums and send them back to us. It was a cool way to work, and I love the drum sound and performances on these tracks.


We then arranged and booked some studio time at Grouse Lodge Studios in Westmeath. It was here we recorded the bulk of the album. It was amazing to be recording in the same rooms that have been used by Michael Jackson, Muse, Snow Patrol etc. Filippo flew in from Italy to produce the sessions. It was a spectacularly cold January, and it took a while to get instruments and hands warmed up and primed for action! But once we got moving and in full flow there was no stopping us. Over the course of 3 days we got major work done on seven tracks from the album. Drum and Bass duties were handled by my good friends and band members Barry Coyle and Cani Bruton. Filippo and I both played some electric and acoustic guitars.


I had my first experience of recording piano on "When You Can" and "Eternity", it was pretty scary but I'm proud of how they turned out. These two songs also benefited from some beautiful Cello playing by Gerard Toal. We recorded hours and hours of material. These various takes and arrangements were all transferred onto Filippo's hard-drive and he headed back to Europe to try make sense of it all!


This was followed by many sessions at VeeBee studios in Mullingar where we recorded lots of additional guitars, vocals and bits and pieces. We also spent a day in the beautiful Hellfire Studios in the Dublin Mountains where we put down strings for "Sacred Place", "Pathways" and "Someone Else's Heart". At this stage we were very nearly finished... For the next step on the journey I flew To Vienna in Austria to hook up with Filippo again and finish up all remaining vocals and other minor overdubs. This was around the time of the volcano ash cloud that had brought air travel to a halt across Europe. Which resulted in me being stuck in Vienna for an extra few days and getting some really nice vocal takes recorded. So it all worked out well.


The very final stage of the album was to take it to Abbey Road Studios in London for mastering. Here we ran it through the very best of audio equipment! The same console that was used for the recent Beatles remasters no less! This stage I felt really brought the album together as a cohesive unit, and gave all the recordings a very warm and creamy quality that I love.


So there you have it, a blow-by-blow account of the making of a record. It was a fun journey, and I hope you can enjoy the results.


Listen or Buy here and now from Bandcamp!