Album Review: Eric Eckhart - This Is Where It Starts

Posted by Unknown on May 04, 2010
Excellent collection of songs from self-confessed late bloomer to music. Contemporary adult rock album from well travelled Berlin based American who gained recognition and fans during a period living in Ireland. 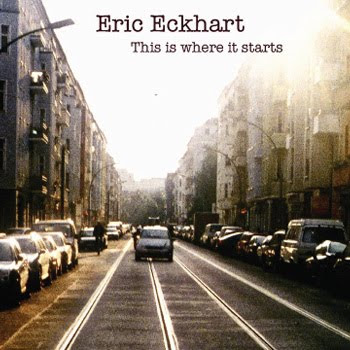 'This Is Where It Starts' is the debut from Eric Eckhart. One of the best things to say about the album is that it's not easy to select a genre for the album. In many ways it reminds me of the contemporary rock of Athlete's album 'Tourist'. The wonderful song 'Lost' reminds me of Coldplay's Yellow and has a great video to accompany it. There are some nice singer-songwriter tracks like 'All My Life' and the album closer 'I Saw A Light'. He rocks out on some other songs while he plays the blues on 'I'm Gone'.


The album was produced by Eric Eckhart and Fab Leseure (worked with Brian Jonestown Massacre & The Frames) and features a number of excellent musicians including Dave Hingerty (Swell Season, The Frames, Josh Ritter) and blog favourite Nina Hynes sings backing vocals on in my opinion is the best track off the album 'Running'.


While there's a huge amount of variety in the album there's a lovely sense that the album represents a very personal journey. 'Lost' is such a beautifully written song with great harmonies. In fact many of the songs are about leaving or being on a journey. Here's the chorus of the opening song 'From Whence I Came'


I find it's a rare thing to get a complete album sent to me. 'This Is Where It Starts' is an honest album of great tracks. It'll make you sing, think, contemplate, meditate, nod your head and in general make you happy to have this CD in your possession.


Have a listen to the album:

Anonymous said…
Great Album! Eric is a talented songwriter.
I had the pleasure of spending some time with Eric, my family and our friends in Co. Mayo, Ire. a few years back and enjoyed listening to Eric sing in the evenings. Thanks Eric for those memories and I am glad that you are still making great music.
Mike K.
11 May 2010 at 01:58