Roundabout 3pm yesterday, actually just after I'd done yesterdays blog, my macbook died on me.


Boo. Hiss. Down with this sort of thing!


For those of you who've not seen the Billy Coleman live experience I should explain that this means I have to completely change my set around, as the macbook runs all my beats and synths and a lot of my loops. It's a bit of a disaster in other words.


I put it to sleep for 15 minutes and when I went to wake it up, it refused to get out of bed. It's still refusing to get out of bed. I'm hoping that the guys I've left it with will be able to resurrect it somehow, but for the time being I've borrowed a laptop from my buddy Brian and so I'm writing to you from the comfort of his couch in Clapham. I'll be buying you a pint later on Murph...


Put it together with the other night and I think this means we'll christen this tour 'The Technical Difficulties Tour'. Or we could call it 'The Beatings Will Continue Until Morale Improves Tour'. I think that might have been done already though.


Thus, a drastically different Billy Coleman live experience hit Club Yoyo (http://www.myspace.com/yoyouk) at the Notting Hill Arts club last night. This place is the grungiest, slummingest dive of a hole I've played in for a long while. I loved it. Concrete floor and walls, lovely sound in there, run by guys who knew what they were doing and couldn't do enough to help you out. I'll update later on with a picture of the place... 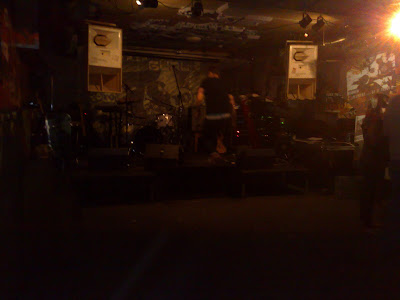 Short of fixing my macbook. Wouldn't really expect them to be able to do that though in fairness.


So it's probably a good thing for me right now that I'm not playing tonight. Time to catch my breath, have a few pints and tune out. Herself is arriving tomorrow so there'll be marathon preparations. I'll be out and about around the route on Sunday so expect some colour from that, the weather is supposed to be good so it should be a great day.


[Bill didn't ask to include the following widget but I wanted to bling the post up a bit .... Peter]