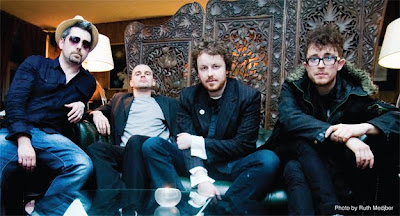 
I've known about Reader's Wives for a long time but I admit I dismissed their sound very quickly. I was totally wrong to do this. Reader's Wives are releasing a five track EP on March 15th which for me is the best music produced in Ireland so far this year.


Niall is a superb songwriter. The lyrics are rich in texture in the same style as Mark Cullens 'Pony Club' lyrics. The music while difficult to limit to a particular genre seems to dance around Niall's rich vocals and lyrics.


The title track is a perfect alternative rock song. It has a big chorus, strong lyrics and indie swagger. Then we have the sublime 'Beautiful Angel'. It's a gentle song of guitars and bass with two part harmonies. 'Everything's better with you' is a fun little folk pop song. 'Eyes Like A Hutu' has this lovely swaying feel to the song similar to Damien Rice's Moody Monday song. The lyrics are amazing on this track. The last track 'Working All Week' again showcases Niall's songwriting ability.


Also Reader's Wives have one of the most original organic blogs I've seen from a band over at http://readerswives.360degreemusic.com/blog/