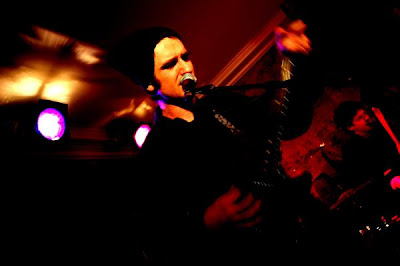 James Guilmartin released his debut album 'Intro Into Exile' at the end of January with a launch upstairs in Whelans. James has spent many years writing songs, regularly gigging and being part of 'The Happy Gang' around '05/'06 with the likes of blog favourites Jenny Lindfors, Robotnik and Alyanya. James pretty much played every instrument on the album and has created an album full of big sounds.

I really like the indie pop sound on the song 'All The Dogs Are Howling Their Own Tune' where it reminds me of Badly Drawn Boy on the 'About a Boy' soundtrack. The huge sound of 'Wise Up' works well mid album and showcases James' powerful voice. 'Untimely Tails' is a grunge inspired song which is the highlight of the album.

'Intro Into Exile' is an album which gets better after a few listens. I wasn't too impressed on the first listen because I had very high expectations from the album. It's almost too big on ambition. There are many attempts at creating an atmospheric aura to the album which doesn't work. It flirts with far too many genres. The 'Muse' sounding 'Breadcrumb Trail' is at the opposite scale to the country folk of 'Gypsy Love Song'. I'm not too sure why production levels on the song 'Spirit of Haum' were stripped down.

'Intro Into Exile' is not a bad album. It has many good songs and does end on a high with an excellent repetitive lullaby in 'Nightly Blossom'. It's good enough to be the end song of any mixtape! I'd be very interested in hearing this album sung live by James either in a solo gig or with a full band in the future.