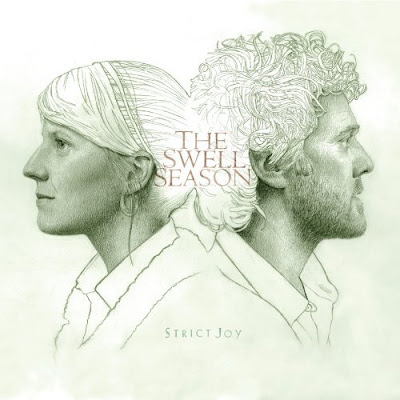 'Strict Joy' is the second album [excluding the Once soundtrack] from The Swell Season and was released at the end of last month worldwide. The Swell Season seem to have been touring non stop since the big Oscar win with only taking short breaks. They are understandably riding the crest of the Oscar wave and making sure they get their music out there to the wider world.


It is within this context that 'Strict Joy' has to be taken. It's more of a retrospective album bringing together the labour of the band's work for the last three or four years. Many of the songs have featured in set-lists of previous tours and are already well known by fans of the band. It also needs to be acknowledged that 'Strict Joy' hasn't been well received in Ireland and I can offer no reason why.


There are songs about being in love and the end of a relationship. If you don't get the male perspective then there's always the female perspective on love life and relationships. The production is top rate and there's no over indulgence on the album. It's an album of good quality folk-rock music performed by musicians with a love for music.


'Low Rising' is such a great uplifting tune. 'Feeling the Pull' is the sound of a band having the time of their lives. I love the 70's folk inspired feel to 'Love That Conquers' and would rival the splendid 'I Have Loved You Wrong' as the best track on the album. Overall the quality is really good but there is something that is missing on the album. 'Strict Joy' is like a collection of individual songs composed over a long time period rather than an album of cutting edge new music from a band making progress in the music world.

....... I may be wrong but I'm gonna predict that in early 2011 The Frames will have a new album out as well as Marketa releasing her debut solo album. If I'm right I'll have two great albums to review into the future!

Its disappointing how the album was received in Ireland, but they didn't do much to promote it here either. They toured two months before its release and didn't do any tv or radio promotion the week it was released, so its not surprising. That never happens with a frames album.

It makes sense that they are enjoying the success of the oscar and trying to promote themselves in America as much as possible. I just miss being able to see them live more often.
Really looking forward to the 20th anniversary frames celebrations and a new frames album in 2011.

Its good that they are doing something different, and i'm a bit sick of the people who refuse to listen to any swell season stuff just because its not cool or not the frames.

Peter N said…
Yeah I totally get your point and thanks so much for the comment. I suppose the lack of real PR in the country has made me think that 'Strict Joy' is all about documenting the last 3 years of the band and not about looking forward. I think it's also time to stop 'Glen Bashing' and accept that he is one of the good guys making an honest living!

DeadBilly said…
I'm not one to rub it in, but for once I get the good end of the stick for living in the States. I got to see them in Arizona earlier this week, and it was amongst the best live shows I've been to (and I've been to many).

Your review is spot-on, right down to naming my favorite three tracks ("Feeling the Pull", "I Have Loved You Wrong", and "Love That Conquers").

I hope you're right about a new Frames album. With them all touring together, I was beginning to think The Frames had been absorbed into The Swell Season, and were no more.
22 November 2009 at 04:09

Anonymous said…
This comment has been removed by a blog administrator.
22 November 2009 at 07:32

friend of rachel worth said…
Interesting to know it wasnt well received in Ireland, maybe a bit of the "we hate it when out frinends become successful" syndrome on the part of reviewers. I think it's a great lp
22 November 2009 at 22:32

Doubtful that's the case - simply, it doesn't live anywhere near the material he has produced over the last 20 years.

...and to be honest, the whole "we hate it when out friends become successful" retort is a pretty cheap insult to those that spend time writing constructive and intelligent reviews/articles.
25 November 2009 at 21:18

Unknown said…
Hey Leigh thanks for the comment and I totally agree that this album overall is probably the weakest album Glen has produced. Even though as mentioned in the review there are some good songs on there like Feeling the Pull and I Have Loved You Wrong.

Also think you are right that it's an insult to reviewers if they hold a grudge because of some sort of success envy.
25 November 2009 at 21:41

friend of rachel worth said…
Leigh + Peter apologies i didnt mean it the way it came out. In hindsight it was a flippant comment without knowing the background. However i stand by the fact i think it is a great lp and if not up there with the best of the Frames or previous Swell Season , it is better than alot of other stuff out there
4 December 2009 at 20:39