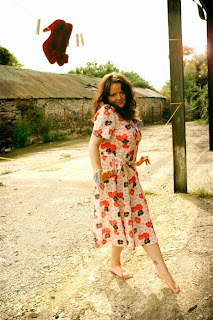 It's been two weeks since the release of Miss Paula Flynn's self titled debut and it's been on regular play in my car and at home during the fortnight. I could easily write a decent sized essay about this album. I'll try to explain why it's a special collection of songs that will compete with Lisa O'Neill's and Declan DeBarra's albums for my album of the year.


The first thing you should notice about the album apart from the wonderful packaging is that it's a big album of 17 tracks. This includes 13 songs and three spoken word tracks backed by a music soundtrack and a closing lullaby. The spoken word tracks for me act as intermissions and give a rather structured 'peak and trough' feel to the album on a whole.


'Miss Paula Flynn' is a very personal reflective album. It's full of thoughtful imagery about many of life's personal issues. 'Wallpaper's Peeling' is like a tragic waltz dedicated to an end of a relationship. 'Angels in the Dark' contains many references to nature with the trees in the moonlight being the angels in the dark. The reflective tones in 'Killed a Bird' has the ability to bring me close to tears. This personal reflection and thoughtful imagery is wrapped up and delivered by Paula's delicate beautiful voice and the amazing musical compositions on the album.


You could say the above represents the 'Trough' and the 'Peaks' are the uplifting tracks such as 'Magic', 'Goldfish at the Fair' and 'Five a Day' where Paula is trying to convince us of the message that sex, love, pain, death and Miss Paula Flynn is good for you.... or so the doctors say!


I love the spoken word tracks. 'Disco Dance' paints the picture of a situation which we have all found ourselves or in fact find ourselves in a nightclub in the middle of a dance floor some weekend. 'Boxed In' is a poetic story all about being trapped in a situation you don't want. Is there a better way to close an album than the lullaby 'Little Black Sheep'.


Overall 'Miss Paula Flynn' is a great album. It has great lyrics, beautiful folk music and that voice you could easily fall in love with. It's an album I would buy for my niece in college, my 40 year old sister and my best friend and they will all love it!

Holiday In Sweden from Miss Paula Flynn on Vimeo.