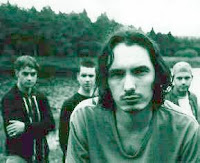 The Prayer Boat were formed in 1987 in Blessington, Co. Wicklow. After a short period of playing in local bars and clubs, The Prayer Boat attracted a cult following in Dublin and two years of touring in Ireland culminated in the release of the band's first single Beautiful History on their own label, Stem Records. The band were eventually signed to RCA in 1989 and released their debut 'Oceanic Feeling' in 1991. Dark Green, released in 1995 became a chart hit in Ireland and also featured in the Top 20 Singles of the Year in Hot Press.

The Prayer Boat released Polichinelle with Setanta Records in 1999 in the UK and with Atlantic Records in 2001 in the United States. It is this album which both critics and fans of The Prayer Boat think best represents the unique music of the band.

The album Polichinelle as a whole was highly acclaimed by music journals. Top magazine said that it was 'Absolutely incandescent' and 'So consistently beautiful it could be displayed in a shop window'; NME described it as 'quite stunning' and Billboard voted it as its album of the year, saying that, 'this gorgeous set of intimate, meticulously crafted pop tunes was among the best albums to come across our desk this year.'

Soon The Stars Will Steer Me

If I did a list of my top three favourite albums I'd have to go for Jeff Buckley's Grace, Mark Dignam's 'Poetry & Songs ...' and 'Polichinelle' from The Prayer Boat. Unbelievably in about two weeks I'll get a chance to listen to the whole record live in a special ten year anniversary gig in Whelans on October 14th. When you see the success of bands like Coldplay and Keane it really is criminal that the world hasn't had a chance to listen to Emmett's voice and their beautifully written tunes.

It Hurts To Lose You

friend of rachel worth said…
Really like the prayer boat and E tilley's solo lp which includes a song of beautiful sadness - amsterdam weeps
2 October 2009 at 21:06

Lydia L. said…
it's funny we 've got the exact same
top three list of all time...
Their first album "Oceanic feeling"
is perfect, too...

Is there any possibility,to find their first EP ("The Upside Dow"), anywhere and in any form...?

Expedition North said…
Along with Whipping Boy, the most underrated Irish band of all time.
I used see them religiously in the (old) Roisin Dubh in Galway circa 1997-1998.
I also attending that anniversary show in Whelan's and am just in the door from seeing Emmett solo in Whelan's again now.
Form is temporary.
Class , permanent.
1 July 2012 at 00:07