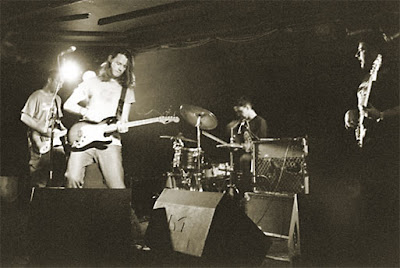 Label were a four piece rock band based in Dublin. Their musical collaborations began in 2001 after an incident involving some local thieves and the four members of the band. Simon Good (The Mary Janes), Shane Fitzsimons, (Damien Rice, Mundy, Lisa Hannigan) and Binzer (The Frames, Concerto For Constantine) - while taking a break from the a jam session at a rehearsal space near the Temple Bar area of Dublin - stumbled upon a lone busker, Terry Sutton. They noticed Sutton was in trouble with some local thieves who where about to take what they could. With raised voices and fist flying the trio managed to save him from a beating and the price of four beers in the process.

An hour or so later in the nearest drinking establishment, the three realised they needed a singer and the fourth needed a band and a place to stay, so 'Label' were formed.

Having played with, and alongside, some of Ireland's top artists such as the Frames, Bell-X1 and Damien Rice, Label have been tagged a super-group of sorts. Their live shows are an exceptional strength of the band, with the intensity and energy that?s created, delivering great songs with blistering full-tilt guitars, a powerful rhythm section and an equally powerful vocal performance. This has landed them a slot at witness 2002, a fanning session on 2fm and a place on the i.m.r.o show case tour 2003.

I remember constantly checking out the bands website for developments and there wasn't any after 2004/2005. The band seem to fade and with it all hope for a Label album. It is still a mystery as to why Terry Sutton has not delivered an album.

Legacy: The members of Label have continued in the music business. Shane is currently the bassist with Lisa Hannigan and Damien Rice while Binzer is drumming in Concerto for Constantine. However Terry Sutton who played a few gigs last year is working on a debut album.

If you like the above tracks could you the reader do me a massive favour by adding a comment. I'll then send this post onto Terry in the hope that in some small way we may encourage an album out of the amazing talent that is Terry Sutton.

sdfg546sd5f4g said…
Dear Label. I like your music. I'd love to be able to have an album of yours on my iPod. I'd probably illegally download said album but pay into whatever gig you're playing in Dublin and bring friends too which in the longrun would be worth much more than the 12euro to buy the album.

Unknown said…
No way, The Laughter is the most amazing "love" song I have heard recently. It screws you up yet opens all doors to release your soul however painful it may be. Oh God, it brings me back to "those spaces". It is SOOOO much better lyrically (deeper) and melodically (harmony) than Solid Road. I just love it, I really do love this song. I am so glad I discovered it very recently (Feb 2010), it really fills a lot of voids if you know what I mean yet leaves you empty in the right spaces. Lots and lots of love J
12 February 2010 at 00:17