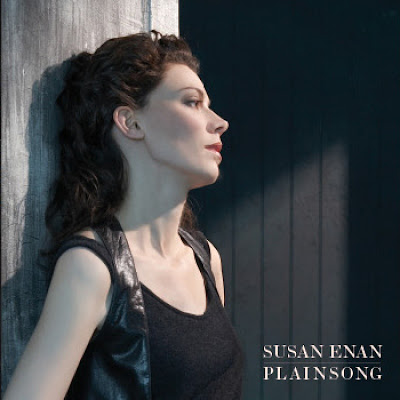 English singer Susan Enan has been adopted by the blog as an honorary Irish artist due to the time she spent living in Northern Ireland. Her nomadic periods result in Susan being a worldwide artist but without a championing fanbase as such. As I do my usual reference search on google or elbo.ws I am fascinated by the lack of results. However with one search of Susan Enan on YouTube you get a sense of how well received worldwide her music has become with many clips featuring Susan's song 'Bring on the Wonder' from the TV programme 'Bones'.

Plainsong was released in July this year and ..... "has been recorded in 5 different countries, much of it in Enan's small home studio in Brooklyn. It was finally released in July 2009 and features co-production from Alan Bezozi, musical appearances from Ashwin Sood (drums), Steve Schiltz (guitars), Graham Maby (bass), and vocal appearances from Declan O'Rouke and Sarah McLachlan. It was mixed in London by Alan Branch and mastered by Jon Astley." .... taken from www.susanenan.com

'Plainsong' is an album I've genuinely been waiting for since Susan's amazing Moonlight EP was released in 2003. She has a wonderful voice similar to Dar Williams and Natalie Merchant. The songs could easily be described as plain by many an ear but if you're in the mood for beautifully written candlelight pop music then 'Plainsong' is perfect. The album kicks off with 'Bird' which is the most radio friendly track on the album. Sarah McLaughlan sings backing vocals for 'Bring Out The Wonder' and our own Declan O'ROurke does backing vocal duties on 'Skin, Bone & Silicone'. 'Moonlight' has been given a Jazzy make-over since the EP and is still a great tune. Another highlight for me is the beautiful love song 'On Your Side'. The lyrics are meaningful, usually displaying huge positivity and highly thought-provoking. The use of the trusty string section is restricted to great effect such as on the track 'If You're Feeling Low'. Overall it's a great album!