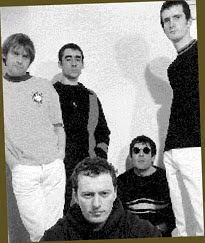 Since the closure of the excellent Irish Music Central site I'm really struggling to find information about the best Irish bands from back in the day! Revelino were moderately successful. They made it onto John Peel's radar, according to Hot Press journalists the band had the third best single released in 1994 and they had their music featured in the movie 'I Went Down'. They were also the Irish band who displayed their Beatles influences very clearly in their music and sound.


Revelino were Brendan Tallon, on Bren Berry on guitar, and Shane Rafferty on drums. Joining them were Alan Momntgomery on bass and Brendan’s brother Ciaran on guitars.

They first appeared on the Dublin gigging circuit in late 1994. Their first album was released at the same time which was voted the 47th best Irish album ever in 2005 by Hot Press. 'Don't Lead Me Down' came from the self titled debut and was on the 'I Went Down' soundtrack.

Don't Lead Me Down

The second album ‘Broadcaster’ was released in 1996 and was much heavier than the debut. ‘Step on High” received considerable airplay on the John Peel show. 'Been and Gone' was an excellent album closer and again highlights their Beatles influences.

The band had been reduced to the Tallon brothers, Bren Berry and drummer Ronan McHugh for the third album “To the End” which was released in 2000. The album contains many good song but fails to reproduce the sound and buzz of the eloquent debut.

Death of a Century