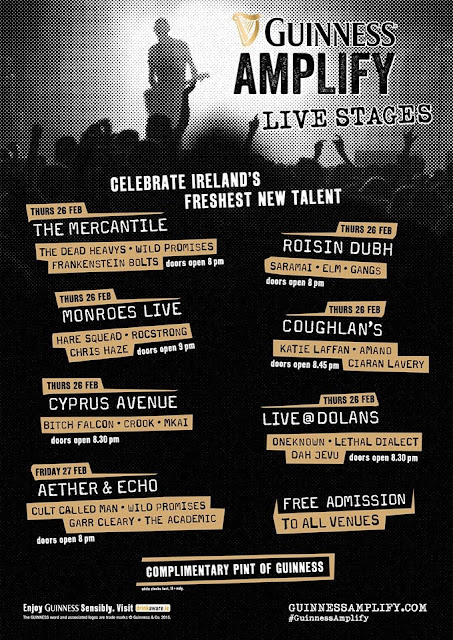 Elm are a 4 piece band with a dark, earthy sound like no other, composed of guitar, drums, cello and haunting vocals. A atmospheric sound anyone would be captivated by.

We like to think we have proved ourselves since getting together in just September 2014. Out of 800 applicants of Guinness Amplify we were one of 22 acts picked to perform at the Guinness Amplify Live Stages showcase! Not only that, but Guinness gave us three days recording time in the top studio in Dublin, crazy right? It doesn't end there, we were shell shocked when Johnny Quinn strolled into the studio whilst recording to help us develop the sound he fell in love with whilst reviewing applicants! We were his favourite applicant of the promotion! (Were still adjusting to that thought!!)

Other than the Guinness Amplify success we were also picked to perform on the main stage of the famous Whelans One's To Watch gig, and since then gigged in most established music venue in Dublin!


4. What are your future plans?
What's to come? We've only begun, so everything is still hyping up, which is so amazing and we are literally so exited. For instance, we have our music video coming out at the end of February, for our single 'concentrate'. We are also planning our EP launch, choosing the venue, how to promote it, and so much more! Stressful at times but literally were doing what we love!

We are also getting ready for our festival season coming, we have confirmed two festivals, but our mouths are strictly sealed as to which! Plus we love teasing you all!

We're so exited for the festival season to begin, but beyond that, our next step we'd love to take is to hit the road, with a band or artist we do truly love, like Daughter, Damien Rice, Ben Howard, or even London Grammar. We just really want to grow in every way we can, from our sound to our fans.


5. Name something unique about you or/and your product?

We find that our sound is really dark, intense, intimate music, but introducing the cello amplifies the whole feel of Elm!

With the vocalist on the track having a quite unique and quirky tone, it does grab listeners attention, with some not knowing if it's a male or female voice!

Also, we are very Pro LGBT, with most of the members being gay themselves, they strive to give equality vibes in every gig!

Funnily enough, we all have different music tastes, with the cello player loving classical, the drummer loving punk, and the vocalist and guitarist being driven to obsession with indie, ambient vibes, it's nearly impossible to pick! Although, we all do love What A Wonderful World, I mean who doesn't?!? It's beautiful!! On road trips we seem to be big fans of rapping Shaggy, gas I know..


Again it's hard to say, but the vocalist and guitarist demand to put down Damien Rice's new album 'my favourite faded fantasy'. It's new, but could make the strongest weep. So heartfelt it's scary.

Catch Elm live on Thursday 26th Feb in the Roisin Dubh with Saramai and Gangs.