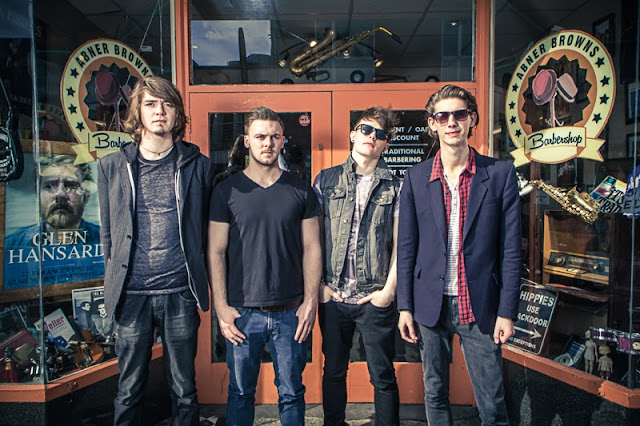 Q 1. In less than six words, who is Travis Oaks?

Aran: We are currently in living in Maynooth, and Dublin


Q 3. What are your achievements to date?

Aran: Won the battle of the bands in the Academy!

Mike: Supporting the Hot Sprockets for their album launch.

Aran: Enjoying life, working hard, writing songs and gigging as much as we can!

Mike: Just released our EP so promoting that with loads of gigs around the country.

Taran: Getting ourselves out there and going on a Scottish tour in February!

Killian: Playing as many shows as we can, and writing songs like there’s no tomorrow.

Mike: In one review of the EP, they said, as a positive thing, that I ignore usual Vocal convention. i like that.

Killian: I’m gunna push the boat out here and say our sound is fairly unique!

Q 6. What is the best song ever written and why?

Aran: I can't tell you what the best song ever written is but i can certainly tell you my favourite, Metallicas S&M version of Nothing Else Matters. My mother showed this song to me when i was little, it was the first song to make me cry and introduced me the to great world of Rock and Roll!

Killian: Pheromone Cvlt by letlive. cause it has my favourite lyric ever! ("There’s no shame, screaming at deaf weddings")

Q 7. What's the best album ever made?

Mike: Elephant by the white stripes is definitely a masterpiece.

Killian: Queens Of The Stone Age - Like Clockwork (Or ‘Songs for the Deaf’)

Aran: Keep on writing and gigging! We want to forever improve and become he best band we possibly can!

Mike: Record some more songs. We’ve got lots of songs in the bank and we’re still developing our sound.

Killian: Explore our sound more, record an album and play all over the world!


Aran: Im accepting any charitable donations you wish to send my way! :P

Killian: You can get a Travis Oaks t-shirt and our EP at any of our shows!


Travis Oaks have certainly gained the attention of music lovers since their launch onto the Irish music scene last summer; playing Ireland’s top festivals with no official release at the time.
Now, armed with their debut three-track EP, there are no signs of Travis Oaks slowing down as they today announce support to ASLAN at the newly renovated The Cinema Stage, Old Castle Co. Meath on 20th December, before getting ready to hit the Scottish music scene touring with KERRANG favorites Altered Sky.