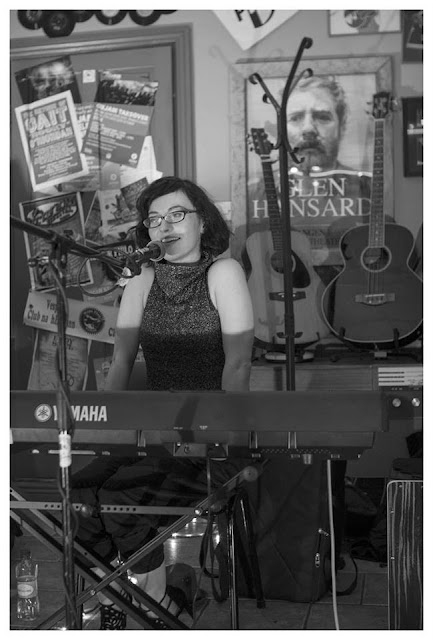 I live in Cabra in Dublin 7, but am from Carrick on Shannon in Co. Leitrim

I released my début EP, ‘On love.. and other murder mysteries’ in August 2013 and it got some lovely feedback (“So new, so fresh and so good”, Carl Corcoran, The Blue of the Night, RTÉ Lyric fm). Track 3 from the EP, ‘How much do you love me?’, won a finalist position in the 2013 UK International Songwriting Competition. That was a nice boost. I was delighted too to be named Guinness Amplify’s ‘pick of Connaught’ 2014. And what else.. I just finished a psychology degree, which I flippin’ loved every minute of. Nerd-o-rama.

Teaching elementary English to international students by morning, singing ‘I’ll tell me ma’ and assorted other ballads with tourists and English students by afternoon and evening*, and writing songs and organising gigs in the bits in between**.
*http://dennysdublintours.com/dublin-singsong-show/
**http://ailieblunnie.com/

5. Name something unique about you or/and your product?
I’m as normal as can be, love writing songs, love playing songs, love people-watching, eating floury potatoes, drinking tea, having fun. What I do when I write music is first, pulled from some emotion or other, and second, technical/intellectual, if ya get me. I like to try and make people feel at ease when they come to gigs.. like they can leave their worries at the door. And sometimes singing about someone metaphorically driving a sledge-hammer through your guts can help do that, in a backwards kind of way. I also write happy songs.


6. What is the best song ever written?
God almighty, that’s like trying to pick your favourite child.
7. What's the best album ever made?
Oh look, is that a bird flying past the window?
8. What are your future plans?
I’m recording an album at the moment. I’d like to play in the Olympia someday. I love working with other people on out-of-my-comfort-zone stuff too and have just started a collaboration project with a poet. I’d like to get good quality recordings made of all the songs I play at gigs, so that people can listen to them at home if they want to. I’d love a song to be used in an ad or a film. I want to make lovely attractive little products – like for my next album, I was half thinking of having the booklet made in pop-up-book form, although that might cost a million euro. For my bread and butter, I want to work in psychology, like possibly as an expressive arts therapist working with young people with eating disorders. I’d also like to buy a house near the sea, and travel around the world at least once.
9. Where can I spend money on you or your product?
I think the best way is to come to a gig. I’ve one coming up on Thursday 4th December upstairs in Whelan’s with a full band and I think that will be good!*** I’ve just ordered another run of EPs which will be for sale on my website soon again too (you can download from there either if you like). Apart from that, if you bump into me, you could buy me a cuppa tea? Or if you are a designer or artist of any kind (clothes, graphic, hair, film), we could get some sort of bartering system in operation?
: http://www.whelanslive.com/index.php/ailie-blunnie-2/